The LC's ergonomics aren’t quite up to German standards, but quality and ambience are superb 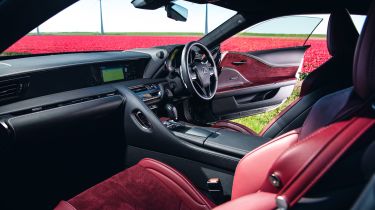 Lexus makes hugely appealing interiors that don’t always have the ergonomic rigour of their German competitors, but there’s no doubting the design and manufacturing excellence that goes into the LC. While the layout of some switchgear leaves a little to be desired, and we imagine Lexus owners would kill for a BMW iDrive-style control system, the craftsmanship and overall ambience is superb.

The central instruments in front of the driver feature a TFT screen with large analogue-style main instrument graphic that disappears sideways to reveal further screens. A similar feature appeared on the Lexus LFA supercar, and it’s an exciting design touch.

The location of much of the switchgear isn't very intuitive, though, with some elements – like the twist switches on the side of the main instrument binnacle – appearing almost as afterthoughts, although there’s some logic in having traction control on one side and drive modes on the other.

Once you’ve got used to the foibles, the dashboard looks great, with the juxtaposition of modern technology and classic trim materials like leather and metal creating an interesting feel.

There are four trim levels available with the LC 500h’s hybrid powertrain, the first being the standard configuration. Spec includes 20-inch alloy wheels, LED headlamps, climate control, heated and cooled front seats and keyless entry. Move up to the Sport Pack and you get the bigger 21-inch alloys, a carbon-fibre roof and sports seats, while Sport+ gives you go-faster goodies including a retractable active rear spoiler, four-wheel active steering and a limited-slip differential.

Finally, there’s a Limited Edition spec, which gives you all the extras from the Sport+ Pack plus the upgraded Mark Levinson stereo and head-up display that are optional on other LC grades.

It’s a bit annoying that Lexus flagship models don’t come with Android Auto or Apple CarPlay, but you can still connect your phone and there’s plenty of functionality to play with on the large 10.3-inch display. We don't get on with the touchpad system, though; this sits between the seats but is very hard to use when driving and its menus are too involved. Things look up again on the music front, as both the standard Pioneer system and the Mark Levinson upgrade provide exceptional quality.