With plenty of safety kit and a rock-solid reliability story, the Lexus ES 300h has your peace of mind covered

The Lexus ES is now in its seventh generation, so although we’ve not seen it here in the UK before it’s certainly not an unknown quantity.

The hybrid system is updated from, but basically similar to, those fitted to millions of Toyota group vehicles now, too, so there’s nothing on the technology side to raise any cause for concern.

The Lexus ES didn't feature in our 2020 Driver Power owner satisfaction survey, but just about every other Lexus did. We've no reason to doubt the ES will live up to the brand's excellent reputation, however. 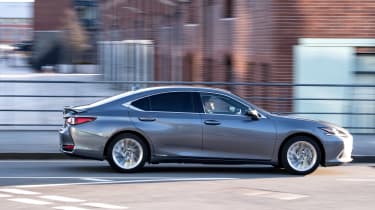 Lexus is typically to be found topping our satisfaction charts, and true to form it came in at number one in the latest survey, with an 11.1% average share of owners reporting faults with their car.

Euro NCAP awarded the ES a full five-star rating in 2018, with a 91% score for adult occupant protection and 87% for children. There's nothing much to worry about in this department.

The ES comes with a package of integrated safety systems called Lexus Safety System +2.0, which includes autonomous emergency braking with the ability to detect cyclists, pedestrian and vehicles. It also has adaptive LED headlamps that not only switch between high and dipped beams, but also adjust the light pattern to reduce glare for oncoming traffic.

As of September 2020, all models in the range also have blind-spot monitoring and rear-cross traffic alert as standard.