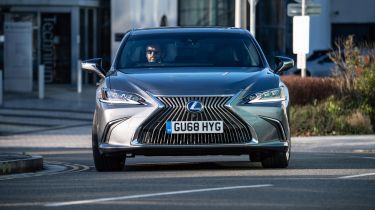 Lexus hybrid drivetrain technology is improving all the time, and the installation in the ES feels like one of the best yet. Smooth and refined in normal usage, it also has less of the ‘rubber band’ effect that afflicts other models under hard acceleration – although it’s still evident and frustrating if you’re in a hurry.

Although the Lexus ES is available with a 3.5-litre V6 petrol engine in other markets, UK drivers are offered only the 300h, which has a smaller – and all-new – 2.5-litre four-cylinder engine that’s laden with technical innovations designed primarily to eke the most mileage out of every gallon.

This doesn’t come at the cost of smoothness and refinement, though, particularly as a new hybrid system controller has been designed to more closely mimic the responses and power delivery of a standard internal-combustion drivetrain.

Drive is to the front wheels via a Constantly Variable Transmission (CVT), which has artificial stepped ratios in an effort to mimic an eight-speed automatic gearbox of the kind you’ll find in most rival executive models. It works better than the CVTs in some other Lexus models, but floor the accelerator and the ES speeds from 0-62mph in a shade under nine seconds.

It won’t nearly trouble key rivals in a traffic-light grand prix – and neither will its 112mph top speed. The truth is the heavy 1.7-ton ES feels like it could do with a little more than its 215bhp, but drivers who prefer to take it easy will be rewarded with a truly refined experience.

The front-wheel-drive chassis of the Lexus ES doesn’t have the same feel and agility as a rear-drive BMW or Jaguar, but it’s not so far off an Audi A6’s. The primary handling characteristic when cornering on the limit is for the nose to push wide – so-called understeer – but the Lexus ES is pretty grippy, so this doesn’t happen too early.

The steering is direct and accurate, and the suspension absorbs bumps well without being too soft – so the car doesn’t roll too much in corners, and feels poised and stable even at relatively high speeds.

The F-Sport has adjustable suspension modes, designed to make the car feel sportier, but it’s hard really to notice much difference. It rides on larger 19-inch wheels, too, and the trade-off in ride comfort compromise outweighs any actual benefits in handling prowess. We’d stick to the standard set-up unless you have your heart set on those big alloy wheels for style reasons.