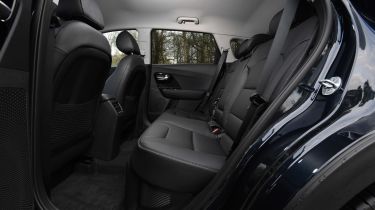 The Niro PHEV is roughly the same length as the Kia Ceed hatchback and space inside is quite impressive, both in the front and rear. However, one of the drawbacks of choosing this PHEV rather than the Niro hybrid is that its larger batteries mean it has a smaller boot.

As in most cars, there’s no shortage of space for a couple of people in the front of the Niro. Better still, there’s also enough space in the back for two adults to sit comfortably without their heads brushing the roof. The only issue is that the middle seat is quite narrow and is best reserved for kids.

At least no-one should have a problem getting into the Niro. Although it rides a little higher than the Ceed hatchback, you don’t have to step up into it like you would a 'proper' SUV like the Kia Sportage.

What also makes this is good family car is the amount of oddment stowage. There are generously sized cubbies in the front and back, so you won’t be short of somewhere to keep drinks bottles or other bits and pieces. 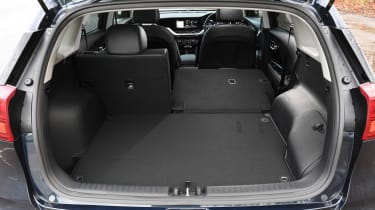 The regular Niro has a 382-litre boot, but the larger battery pack in the PHEV means its capacity is 324 litres behind the rear seats and 1,322 litres with them folded down. In contrast, the plug-in version of the Toyota Prius has a 360-litre boot and the MINI Countryman Cooper S E ALL4 offers 405 litres of luggage space.

At least the Kia’s large tailgate opening and low loading lip mean it’s easy to get things in and out. The rear seats also fold down to leave a flat boot floor, so you can slide in large heavy objects without difficulty. But it’s a shame that the seats are heavy and can be tricky to push back into place.