Ford claims best-in-class rear legroom for the Kuga and it’s hard to argue, as there's loads of space for adults in the back 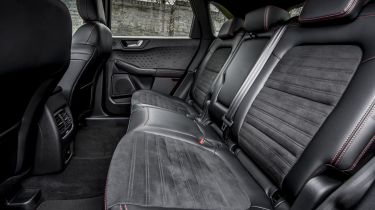 Many plug-in hybrids have to sacrifice some practicality to accommodate their batteries, which affects interior space and outright load volume. The Kuga plug-in doesn't avoid this completely, but by putting most of the electrical hardware under the passenger compartment, Ford has limited its impact on practicality.

The interior is huge and there’s enough room for adults to get comfortable. The boot is slightly smaller than the one in the conventional petrol and diesel Kugas, but in reality there’s very little in it – most should find the car plenty big enough for family duties and the occasional trip to the tip.

Whichever way you look at it, the Ford Kuga is a practical car. There’s no seven-seat option, but don’t let that put you off – not only is there enough space for kids in the back, there’s room for three adults to stretch out in complete comfort. There’s loads of headroom thanks to the high roofline and legroom is generous, too.

The door bins are a decent size and there’s a handy cubby ahead of the gearlever with a wireless phone charging pad. The central cubby has a neat shelf built into it, which is useful for keeping your keys or wallet, but we’d prefer if it was a little wider or deeper – there’s no room for a large water bottle, which is a shame. 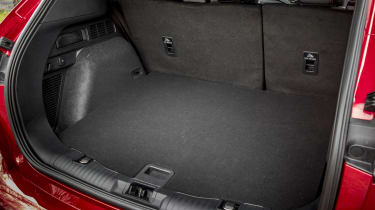 The standard car’s 645-litre boot (with the seats moved forward) puts the Kuga among the most practical cars in this class. In the transition to plug-in hybrid, however, the standard 12-volt battery has been moved, which has a small effect on available boot space. Still, 581 litres is a decent amount and should be more than enough for most families day-to-day.

Fold the Kuga’s rear seats flat and you free up a total of 1,481 litres – again, a little shy of the diesel model’s 1,534-litre load bay. For comparison, a Toyota RAV4 boasts 1,690 litres, while a MINI Countryman hybrid offers just 1,275 litres.