New Toyota-based family SUV with plug-in hybrid power will cost from £45,599 in the UK, with sales starting in November 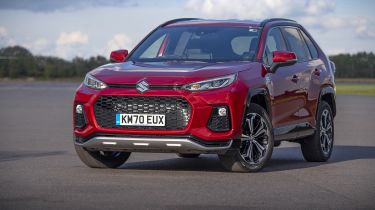 The new Suzuki Across SUV – a rebadged version of the recently announced plug-in hybrid variant of the Toyota RAV4 – will cost from £45,599 in the UK, it has been confirmed. Sales begin in November 2020 and Suzuki says supply of the car will be "very limited" during its first full year on sale.

The product of a tie-up between Toyota and Suzuki, the Across provides Suzuki with a new flagship family SUV that sits above the Vitara and S-Cross in its range. While those two models use mild-hybrid technology, the Across is the first plug-in hybrid car in the Suzuki stable.

Identical mechanically to the RAV4 on which it's based, the Across uses the same 2.5-litre petrol engine and electric motor combination. The motor produces 179bhp, while the engine contributes 182bhp; total system output is 302bhp.

Four-wheel drive is standard, as are four driving modes: EV, Auto EV/HV, HV and battery charger mode. As is the norm with modern plug-in hybrids, these allow the driver to take control of the hybrid system's power flow as required.

An 18.1kWh battery provides power to the electric motor, sufficient for a claimed 75-kilometre (46-mile) electric range. Claimed fuel economy is 282mpg and CO2 emissions are 22g/km; combined with that electric range, that puts the Across in the 6% bracket for Benefit-in-Kind (BiK) company-car tax during the 2020/21 financial year. 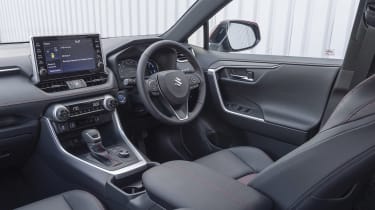 The biggest difference between the RAV4 and the Across is at the front, where a different bumper, grille and headlights have been fitted to help set the Suzuki apart. Otherwise, the pair look more or less the same externally, including their alloy-wheel designs and rear-end treatments. LED headlights are standard and six body colours – also shared with the RAV4 – are offered.

The similarities continue inside the Across, where the RAV4's angular dashboard is carried across; even the steering wheel is identical save for its Suzuki badging. This is no bad thing, however – the Toyota is solidly built and largely well thought-out in this area. A version of Toyota's infotainment system is used, displayed on a nine-inch screen and featuring Apple CarPlay and Android Auto smartphone connectivity. The Across also boasts a 490-litre boot and a range of interior cubbyholes.

Further benefits of the Across' Toyota roots can be found in its list of active safety and driver-assistance technology. Autonomous emergency braking, lane-keeping assistance, traffic-sign recognition, adaptive cruise control with stop-go functionality and a blind-spot monitoring system all feature, along with rear cross-traffic alert and an automatic brake hold system. 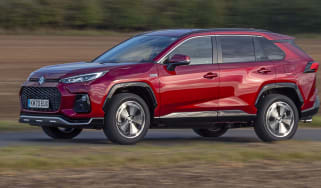