The Peugeot e-208 and Vauxhall Corsa-e are set to shake up the electric hatchback class: how do their numbers compare?

We know that the Peugeot e-208 and Vauxhall Corsa-e are the same underneath; same front-wheel-drive platform, same 50kWh battery, same 134bhp electric motor.

But there are some differences. For a start, the Peugeot gets a rather fancier-looking interior, particularly the configurable digital dials with 3D effect that you get on all but the entry-level trim.

Meanwhile, the Vauxhall’s dashboard feels more conventional, even though the touch-sensitive switches and high-set touchscreen still offer all the functions you’d want. Both cars get sat nav, Apple CarPlay and Android Auto as standard across the range.

The Vauxhall’s is a simpler lineup, though, with two trim levels to choose from rather than the e-208’s four. That can make the Corsa-e look more expensive, with a starting price of £26,490 (after the government's Plug-in Car Grant (PiCG)) compared to the Peugeot’s £25,050, but given that the Corsa gets LED lights and alloys while the e-208 gets halogen lights and steel wheels, spec-for-spec pricing is much closer.

We’ll have to drive them both on UK roads to deliver a final verdict on which is better, so watch this space for that test next year. In the meantime, here’s a full breakdown of the numbers that could sway a decision between these two big-name electric hatchbacks. And if you are shopping for a £25,000 electric car, don't forget to also read our full reviews of the Renault ZOE and MG ZS EV.

The Peugeot's lower starting price will tempt many over the seemingly expensive Corsa-e, but the Corsa's more generous standard equipment makes it very comparable on a spec-for-spec basis. Even the £26,490 entry-level Corsa-e SE Nav gets LED headlights, LED rear lights, electric rear windows, heated and power-folding wing mirrors and 16-inch alloy wheels, none of which is included on the entry-level e-208 Active.

The mid-range e-208 Allure comes in at £26,250 and has all of those features but for the LED headlights; to get those on the e-208, you have to go for GT Line (it's not even optional below that point in the range), which costs £28,100*. However, it does include nice styling touches, including a contrasting black roof and wheelarches.

Our pick of the e-208 range would be GT Line, as it gets those LED headlights, leatherette upholstery, a reversing camera, some great styling touches and an upgraded autonomous emergency braking system that senses cyclists and pedestrians – standard on both versions of the Corsa. Lower e-208 trims have lane-keeping assistance, cruise control and autonomous emergency braking that only responds to vehicles.

Of the two Corsa-e trims on offer, we favour SE Nav given the lower price and great equipment. Top-spec versions of both the Peugeot and Vauxhall get heated seats and steering wheel, keyless entry and an upgraded 10-inch touchscreen, so the near-£30,000 price will be justifiable to many luxury-seeking buyers. 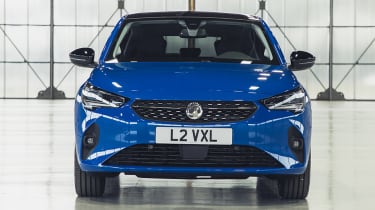 The 50kWh lithium-ion battery pack in the Peugeot e-208 and Vauxhall Corsa-e is thermally managed to ensure the battery maintains its performance for as long as possible. The battery will also be refurbished or replaced if the range drops below 70% of what it was capable of when new within the first eight years or 100,000 miles of its life.

Both cars have claimed ranges of just over 200 miles, and in our drive of the Peugeot it seemed like it could get close to that in real-world driving during warmer months, while we'd expect a real-world range of closer to 150 miles in winter as cold weather always reduces the range on electric cars.

Interestingly, Vauxhall claims that the 'Eco' setting can improve the Corsa's official claimed range by 40%, which would suggest a potential range of 287 miles. We haven't driven the car yet, but as soon as we do we'll report back on our experience of the real-world range. 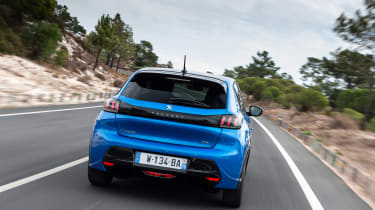 Both the Peugeot and Corsa are very closely matched on interior space, although in our time with them we've found that the Corsa seems to have a fraction less rear legroom, even if both will be great cars for a small family.

The only big disappointment is that neither has dedicated space for cable storage, and the Corsa's boot space falls short of the Peugeot's, too. Here's how they compare...