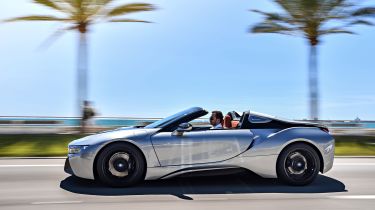 With any convertible removing the roof gives a great connection to the driving experience, and the BMW i8 Roadster is no different. It enhances what the car offers, and there aren’t too many dynamic drawbacks to this convertible thanks to its clever construction.

The i8 Roadster was only ever available with one engine and motor option. The former is a 1.5-litre three-cylinder turbocharged petrol unit shared with the MINI Cooper (MINI is owned by BMW and produces its own plug-in hybrid models), only here it’s been tuned to produce 228bhp. The latter is a 141bhp electric motor that drives the front wheels, giving a total of 369bhp. The powertrain and its output is identical to the i8 Coupe, but the i8 Roadster’s performance is slightly different.

That’s because the electric folding roof makes it a little heavier. With a kerbweight of 1,595kg it’s enough to accelerate the i8 from 0-62mph in 4.6 seconds, which is two tenths slower than the Coupe. Four-wheel drive (the front wheels are driven by the electric motor) means there’s lots of grip so the BMW puts all that power to the road effectively.

Top speed is an electronically limited 155mph. The i8 Roadster can reach up to 75mph on just electric power so you can run with no CO2 emissions even on the motorway. The gearbox isn’t quite as sharp or responsive as a modern dual-clutch, but at least it’s smooth, as the switch between the different power sources isn’t really jerky.

You can enhance the sportiness on offer by dropping the i8 into Sport mode. This amplifies the three-cylinder unit’s gruff rumble that fits with the car’s hi-tech make-up. You also get a techy whine from the front electric motor on full throttle, while you can hear the unit recouping energy under braking with a similar buzz. But it’s not too intrusive.

This electric assistance means the performance is easily enough to surprise you given the i8 Roadster only packs a little 1.5-litre engine. It’s also quick in electric mode as the instant response sends the Roadster forward, accelerating keenly without any lag. At max power the hybrid system delivers a level of performance off the line that could even just get the jump on some conventional rivals.

There are some negatives though. One of them is the brakes. When you’re slowing down the electric motor helps to shed speed, acting in reverse to charge the battery. The brakes have enough stopping power to make you feel safe, but the feel isn’t great due to the regenerative braking.

Like the i8 Coupe, the Roadster uses relatively narrow tyres to help keep emissions low and boost efficiency. This means that there isn’t quite as much grip as in more conventional rivals. It’s more noticeable in the i8 Roadster due to that extra weight, but it’s only most noticeable on track, and few owners will venture onto the circuit with a car like this.

At least the significant bulk of the i8 Roadster’s weight is kept low down in the chassis. This has the benefit of keeping the centre of gravity low and therefore boosts handling and agility; on the road the BMW changes direction with a rewarding degree of responsiveness for a car packing so much tech. The steering has very little feel, though, so it’s not the easiest to judge when the grip will run out. When it does, the i8 won’t bite you, which is a nice trait. There’s always that electric four-wheel drive system to help, too.

When it comes to the ride, the i8 feels firm due to the settings needed to contain the car’s weight at the high speeds it can achieve. It sits on 20-inch wheels, too, so if you hit a bump at any speed it unsettles the suspension and can send the energy rushing through the car’s car’s structure, and as this is very stiff you feel it as a thud or a shudder. This stiff structure does at least mean that with the roof down the chassis doesn’t shake and shimmy over bumps.