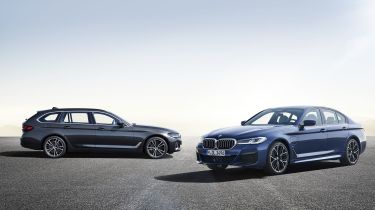 The updated BMW 5 Series hybrid range is now available as five distinct models – including a pair of Touring estate variants for the very first time. The maker will also offer xDrive all-wheel drive, as well as a new-for-2020 six-cylinder 545e version.

The 530e plug-in hybrid was BMW’s most successful electrified product in 2019, selling almost 50,000 units globally. To capitalise on this, BMW is bolstering its facelifted 5 Series range with a 530e Touring, as well as a more powerful 545e model. The latter is only available with xDrive all-wheel drive and this will be optional on the 530e saloon and Touring estate.

As with the rest of the 5 Series range, all new hybrid models benefit from a major cosmetic overhaul for 2020. Every version gets freshened exterior and interior design elements, including new LED lights front and rear, and fresh infotainment options in the cabin. Along with the updates to the hybrid range, the majority of the petrol and diesel engines gain mild-hybrid technology.

The BMW 530e plug-in hybrid, which itself received technical updates in late 2019, continues to form part of the range, but will now be offered in both four-door saloon and five-door Touring estate forms, in order to counter the Mercedes E-Class Estate and Audi A6 Avant plug-in hybrid offerings.

This move sees the 5 Series hybrid mirror its smaller BMW 330e counterpart, which as of summer 2020 is also available as a saloon or Touring estate. In the UK, the 5 Series will be available in SE, M Sport and M Sport Edition trims, the latter being a limited-edition run of 1,000 examples.

Both the 530e saloon and Touring keep the existing choice of rear-wheel drive or xDrive four-wheel drive. In addition, a new, more powerful, plug-in hybrid 5 Series known as the BMW 545e xDrive will join the range, in saloon form only.

The 530e rear-wheel-drive and 530e xDrive four-wheel-drive saloons both make 292hp and 420Nm of torque. They have an identical 0-62mph time of 5.9 seconds, while the rear-wheel-drive version has a slightly higher top speed of 146mph, versus the xDrive's 143mph. Performance figures for both versions of the 530e Touring have yet to be confirmed. 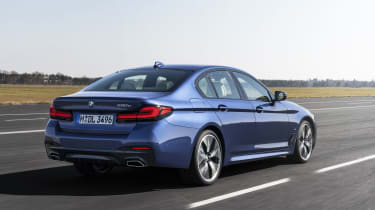 The most fuel efficient BMW 5 Series hybrid will be the rear-wheel drive 530e. The maker claims an electric range of up to 38 miles – or 34 miles with xDrive all-wheel drive. CO2 emissions range from 30-50g/km depend on spec, with possible returns of up to 217mpg.

The 545e is less efficient than the four-cylinder 530e, returning an emission-free range of 33 miles. Emissions of 38-54g/km still give it a low company car tax rating, while BMW claims up to 166mpg.

On the outside, the signature BMW 'kidney' grille has been enlarged and the headlights are now slimmer. They're full LEDs, with two U-shaped daytime running lights (DRLs) built in. Adaptive or Matrix LED headlights, or laser lights, are optional.

The rear lights have also been tweaked, giving rise to a new C-shaped effect and darkened lenses, while a redesigned rear bumper and new exhaust outlets also feature. On the entry-level SE, there's a choice of 17, 18 or 19-inch wheels, while M Sport cars get a new design of 19 or 20-inch wheels.

Upgrading to M Sport brings an M leather steering wheel, sport seats up front, anthracite headliner. Sports suspension is also standard on the petrol and diesel M Sports, but not on the 530e hybrid.

Driver-assistance systems featuring on the upgraded 5 Series include updated steering and lane-keeping assistance functions, as well as something called 'Active Navigation'. According to BMW, this uses sat-nav data to work out when a lane-change will be required on your current route and can then perform the manoeuvre using the lane-changing assistance function.

There's also a 'Drive Recorder', which is effectively a multi-angle dashboard camera that records up to 40 seconds of video footage from different points around the car during a journey. This can be watched back on the car's screen, or downloaded via the USB port. In the event of the car detecting an impact, the 20 seconds before and 20 seconds after an impact will be automatically saved. 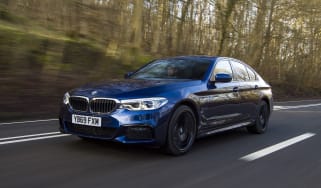