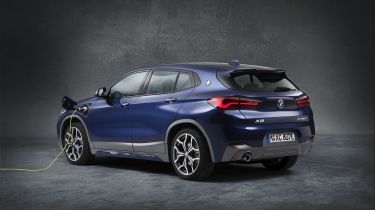 The new X2 xDrive25e plug-in hybrid  is on sale now, priced from £37,885. The new car represents the final addition to the current-generation X2 range ahead of an expected mid-life refresh for the model in mid-2021.

Power comes from a 1.5-litre three-cylinder petrol engine and an electric motor which together produce 217bhp, 365Nm of torque and a 0-62mph time of 6.8 seconds.

All plug-in hybrid X2 models get four-wheel drive as standard, with the electric motor dedicated purely to the rear wheels. A 10kWh battery under the boot floor (taking up 60 litres of load space) allows for a claimed 35-mile all-electric range. Top speed is just over 121mph, or just under 84mph on electric power alone.

BMW claims a full charge will take around five hours from a domestic supply, or three hours from a 7.4kW wallbox; a charge to 80% will take 2.4 hours from this more powerful supply. BMW will offer its own i Wallbox to customers as an optional extra. 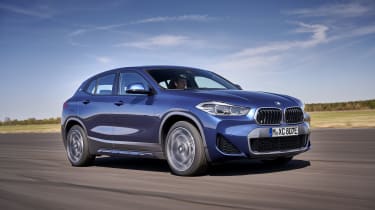 Standard equipment over and above non-hybrid X2s includes acoustic pedestrian protection warning in electric mode, 17-inch alloy wheels and remote access to the car’s climate control through the BMW Connected phone app. The car’s electrical information is displayed on a dedicated section of the infotainment system.

Claimed CO2 emissions and economy figures are good, helped along by the car’s electrification and 10mm-lower ride height for aerodynamics; BMW claims 39–41g/km of CO2 and around 156.9–166.2mpg. 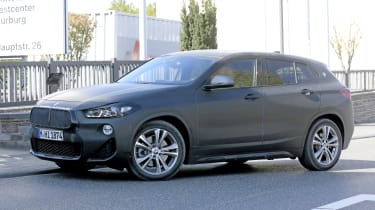 A BMW spokesperson has confirmed that the hybrid X2 will be followed by an update for the entire range at a later date. From these latest spy pictures (above), we can see the new car is likely to feature a set of updated LED head and tail-lights, as well as subtly sculpted bumpers. The car’s grille is covered in cladding, but it doesn’t look like this will differ all that much.

We can expect a handful of new colour and trim choices and a few more changes to the leather and upholstery inside the cabin. It’s likely the X2 will get a lightly tweaked infotainment system, as well as the option of the latest BMW 330e’s fully digital dials.