While the e-up! feels well screwed together, the lack of a proper touchscreen infotainment system lets it down 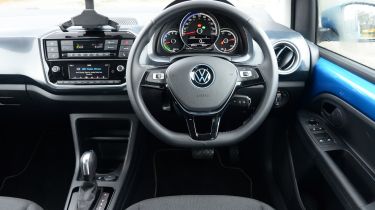 When the Volkswagen up! launched in 2012, the idea of a touchscreen infotainment system or a set of digital dials in a small city car, was little more than a daydream. However, as things have progressed and such technology has become more widely available, the e-up! has started to show its age.

It’s not that the up! feels particularly cheap inside. The material finishes are high-quality, and the flashes of colour on the doors give it a youthful appearance. But the crude smartphone cradle on top of the dashboard and the analogue central speedo instantly makes it feel like you’re sat in something from 2002, rather than 2020.

The e-up! may feel like a bigger, more expensive car on the road, but there’s no mistaking its small-car roots inside. We’ve become used to big, flashy touchscreens and fully digital dashboards – just look at the 3D dials you’ll find in the latest Peugeot e-208, for example – yet in the up! feels a bit spartan and ill-equipped, even if it is built to a good enough standard.

The e-up! is a relaxing car to live with, thanks to a fairly generous kit list. There’s only one spec to choose from when selecting which e-up! to go for; every version gets 15-inch alloy wheels, Volkswagen's electric-specific C-shaped LED daytime running lights, heated front seats, climate control, cruise control and a reversing camera.

That’s in addition to the basic petrol up!’s electric front windows, DAB radio and Bluetooth connectivity. The options list is pretty short – limited to a range of colours, a pair of interior trim choices, a £65 variable height boot floor and a ‘Sharkskin’ dashboard pack. That’s your lot. 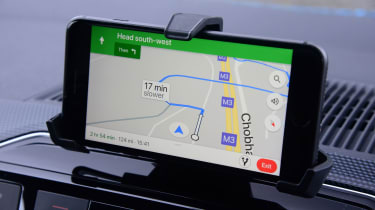 There’s no central infotainment screen in the e-up! – instead, Volkswagen has issued every model with a smartphone cradle on top of the dashboard, which allows you to use your mobile phone for calls, mapping and music streaming.

The thing is, unless you’ve got one of the latest, super-size iPhones, you’ll find yourself squinting at the screen to execute even basic functions. There’s a USB port handily positioned behind the mount, however, making it easy to charge your handheld device.

Below the cradle you’ll find a small digital colour display that allows you to control things like the radio station and Bluetooth connectivity, but it’s not very intuitive to use – and frankly it’s little better than the old dot-matrix displays you’d find in city cars and superminis from two decades ago.