The Volkswagen e-up! is a small car, but thankfully it differs little from the petrol model when it comes to practicality or boot space 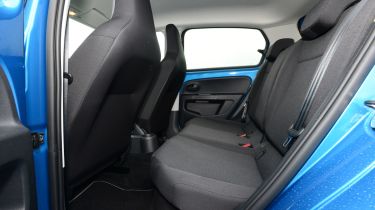 Looking at the e-up! from the outside, you wouldn’t think it’d prove a particularly sensible or practical family car. However, as city cars go, it’s been cleverly thought out – and despite its dinky dimensions there’s space inside for four adults to travel in relative comfort.

Space is emphasised further by the fact that each of the four wheels has been pushed out to the very corners of the car. This not only makes the interior feel light and airy, it also makes the car easy to drive and manoeuvre around town. This is only helped by the large windows – offering exceptional visibility when parking. If you don’t carry much luggage, the e-up! is a surprisingly practical all-electric city car.

The e-up! is a small car, but as small cars go, it’s far from impractical. There are few places for odds and ends inside, with a deep cubby ahead of the gearlever that doubles as a cupholder for large drinks bottles. The door bins aren’t huge, but they remain useful for wallets, parking tickets and the like.

Thanks to the tall roofline there’s enough space in the rear for adults to sit relatively comfortably on shorter journeys. The fact the e-up! is five-door only helps when getting in and out, and should improve access for those wanting to fit child seats in the back. There are ISOFIX mounts on the outer seats, too. 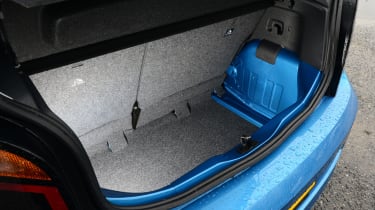 While the e-up!’s 250-litre boot isn’t huge, it’s officially only a litre smaller than the petrol car’s – and you’ll never notice that in day-to-day running. Unless you need to carry the charge cables around with you, that is, as the dedicated storage tray at the base of the boot is tiny and only really big enough for one of the two leads provided. There’s no movable boot floor unless you spec it as an option, either.

If you want to carry people and luggage on a regular basis, then, you’re better off considering one of the e-up!’s supermini rivals. The latest Renault ZOE is a particularly adept family car – with a generous 338-litre boot and space for three in the rear. For running to and from the office or the shops, however, the e-up!’s modest footprint should suffice for most buyers.