The VW Abt eTransporter falls short of other medium-sized electric vans on the market, which offer a longer range for less money 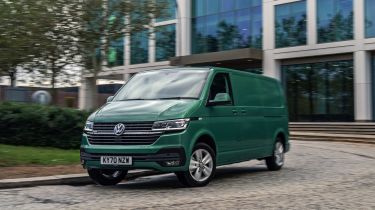 Electric vans have taken off in 2020, with new offerings from Citroen, Peugeot and Vauxhall entering the fray and zero-emissions models now being offered in almost every size of van available. But while Volkswagen was something of a pioneer in electric passenger cars with its e-Golf (and that car's successor, the ID.3), the German brand has lagged behind the competition a bit when it comes to electric commercial vehicles.

The Abt eTransporter T6.1, to give it its full official name, is Volkswagen's first zero-emissions van to be sold in the UK, with the larger eCrafter and smaller eCaddy being offered in Europe but not coming to right-hand-drive markets. As that name suggests, however, the eTransporter isn't a fully fledged VW product: it was developed by independent contractor Abt – a company historically associated with souped-up Audis and Volkswagens, but one that is now turning its hand to electric drivetrain technology off the back of its involvement in Formula E racing.

The 'real' electric Transporter (which is expected to be called the ID.Buzz Cargo) is set to arrive in 2022. In the meantime, this van exists in order to soak up some of the significant demand for electric light commercial vehicles (LCVs) that's anticipated due to environmental regulations growing stricter and cities looking to implement low or zero-emissions zones to cut local air pollution.

The running gear fitted by Abt to make an eTransporter is made up of a 108bhp electric motor driving the front wheels and a 37.3kWh battery storing energy. It's essentially the same technology that was fitted to the now-discontinued e-Golf hatchback mentioned above, which means it's no longer at the cutting edge; the e-Transporter's range and performance figures are a bit underwhelming as a result.

Its claimed driving range is just 82 miles (compared to 93 for the Mercedes eVito and 143 for the Vauxhall Vivaro-e), while top speed is limited to 56mph in order to conserve range. Rapid charging from a 50kW public point will take about 45 minutes to 80% capacity, while a full charge from a 7.2kW wallbox (which can be fitted at home or at a business premises) will be completed in around five and a half hours.

As is common with most fully electric vans, mounting the battery pack low down in the floor means there has been no encroachment on the eTransporter's load area, which has the same 6.7 cubic-metre volume as the diesel van. Maximum payload is a bit down on the diesel, however, at less than a tonne; this reflects the fact that electric vans like the eTransporter tend to be aimed at delivery firms concerned more with volume than weight.

Alternatively, should you need to carry more passengers than cargo, a 'Kombi' crew-cab version (seating either five or six in total) is also available. The panel-van has a steel bulkhead behind the cab, and as standard there's a single sliding side door and twin doors at the back (a top-hinged rear tailgate is a no-cost option and a second sliding side door can be added at extra cost). The Kombi also has a single sliding side door (with a window), while there's a second pane of glass opposite side. At the back, the Kombi has a tailgate with a wiper. 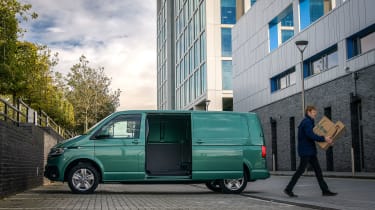 One area where the eTransporter comes up slightly short is with payload weights. None of the electric models can carry more than a tonne in payload, while all versions of the 3.2-tonne diesel Transporter can carry more than a tonne. However, electric vans are often designed to cater for last-mile delivery services, where cargo volume takes priority over maximum weight.

Two trim levels are available – standard and Advance – and both are offered in panel-van and Kombi crew-cab form. Whichever option you pick, the list price will be a little higher than those of the VW's Citroen, Peugeot and Vauxhall rivals mentioned at the outset, but with monthly leases being the order of the day in the van market, and ongoing running costs being the real deciding factor for most operators, that may not be a dealbreaker for many.

In that respect, the eTransporter is no different to its rivals when it comes to being exempt from road tax and the London Congestion Charge, cheap to charge and less expensive to service than a combustion-engined van. At the time of writing, Volkswagen was charging £399 for the first three services, first MoT, pollen filter and brake fluid replacement. Service is needed once a year or every 25,000 miles (whichever comes first), with an extended inspection due at three years/75,000 miles.

To drive, the eTransporter feels quite similar to its diesel equivalent, but it's obviously much quieter on the move; tyre roar is pretty much all you hear, and even that's only evident at higher speeds. Although the VW is as quick off the line as any other electric van, it soon seems to run out of puff, as you're limited to just three-quarters of its total 108bhp output unless you press the accelerator harder, forcing it to 'kick down' into full-power mode.

Ride and handling are decent, and with the heavy batteries placed low down in the chassis, the e-Transporter is less prone to bouncing and crashing around when empty than its combustion-engined counterpart. Inside, the cabin is largely the same as that of the regular Transporter, which is good news, as you get much the same high-quality materials and fittings used in Volkswagen passenger cars. The dash top, door bins and centre console all have cup-holders, so there's space for everyone's Starbucks order, while USB ports and 12v sockets allow phones, laptops or other equipment to be charged and used. A 6.5-inch infotainment touchscreen is standard, and an even larger unit with sat nav can be fitted as an option.

Overall, the eTransporter is a decent enough electric van package on its own terms, but there's no getting away from the fact there are more up-to-date rivals out there that can go further on a charge, and cost less to buy in the first place. Volkswagen may yet regret taking its eye off the ball in what could become a crucial electric-vehicle market in the years to come. 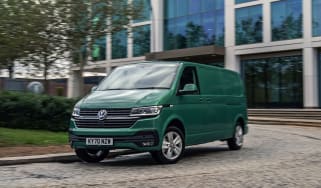 The Volkswagen ABT eTransporter 6.1, a fully electric version of the Transporter van, is on sale now from £42,060 before VAT
VW Transporter hybrid van: new T7 to launch in 2021 with plug-in option 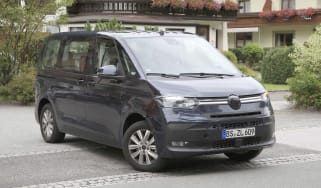 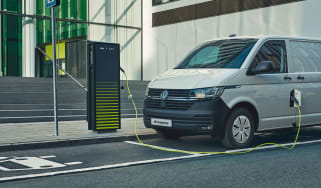 Before going electric, it’s worth separating fact from fiction – find out if an electric van is right for your business
Electric Volkswagen Transporter, Caravelle and California launched 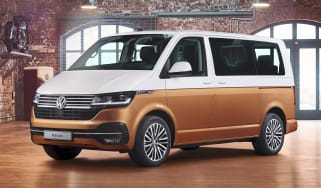 Volkswagen introduces electric powertrain for Transporter, Caravelle and California vans, with 250 miles of range
Skip to ContentSkip to Footer