The Grandland X Hybrid is Vauxhall's first plug-in SUV. It's far from perfect, but not without appeal

Vauxhall is on the cusp of launching its first fully electric car – the Corsa-e hatchback – but before that landmark moment, there’s the small matter of its maiden plug-in hybrid (PHEV) SUV: the Grandland X Hybrid.

The company’s largest SUV is based on the same underpinnings as the Citroen C5 Aircross Hybrid, Peugeot 3008 Hybrid and DS 7 Crossback E-TENSE, while it can count the MINI Countryman S E ALL4, Kia Niro PHEV and Mitsubishi Outlander PHEV among its rivals. The Ford Kuga and BMW X1 xDrive25e plug-in hybrids are due during 2020 too, making this an increasingly crowded segment.

It’s a shame, then, that the Grandland X lacks a standout feature to distinguish it from the pack. Yes, the 1.6-litre turbocharged petrol engine and dual electric motors deliver a hefty 296bhp, and the resulting 0-60mph time of 5.9 seconds is pleasingly daft for a family SUV. But this combination is typical of most premium plug-in hybrids these days, and not unique to the Vauxhall.

The prospect of 204mpg also looks promising on paper, but as is the case with any PHEV, this is a laboratory figure that assumes you’ll start each journey with a full battery. On our test run on a mix of motorways and country roads, we averaged around 45mpg: not bad for a car of this size, but short of what we’ve seen from some full hybrids – and even the odd pure-petrol car – that (in theory) should be less efficient. 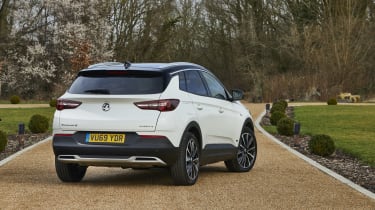 The Grandland X isn’t much fun to drive, either. That turn of pace is pleasing to begin with, but in reality this isn’t the kind of car you’ll relish feeding down a back road. It’s at it’s best around town, where you can take advantage of the light steering and silent running. It’s quiet on the motorway, too, even when the engine is up and running.

But if you’re after a practical, no-nonsense family SUV with the potential for rock-bottom running costs, the Grandland X Hybrid isn’t without appeal. The interior is functional and logically laid out, and if you spend most of your time ferrying the children to school or running short errands – with the ability to charge regularly in between – then Vauxhall’s first plug-in hybrid is a rational (if somewhat pricey) choice.

For a more detailed look at the Vauxhall Grandland X Hybrid, read on for the rest of our in-depth review. 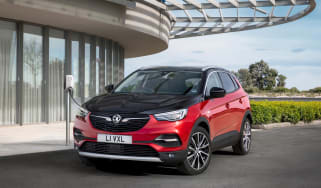