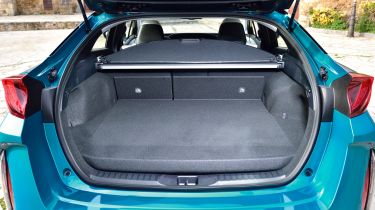 In the move from regular hybrid to plug-in, the Toyota Prius Plug-in Hybrid has lost some of its usability, a factor that makes the standard car such a brilliantly affordable and efficient package – but it’s still worth considering.

The Toyota Prius Plug-in Hybrid is just as practical in the front seats as its regular hybrid sibling, with plenty of room and good visibility. Those centrally mounted instruments mean there’s no binnacle in front of you, so visibility is good. This is helped by the relatively low dashboard.

However, as you move towards the back the news is less positive. While there’s a good amount of leg and headroom in the rear for back seat passengers, there’s only room for two in the rear. That’s because the Prius Plug-in is only a four-seater, due to where the car’s battery pack is located and the constraints this puts on the vehicle.

This drawback is not just limited to how many passengers you can take. The bigger battery eats into boot space, so there’s only 191 litres of luggage room. The battery means the boot floor is quite high, so at least it’s easy to lift bags into the boot.

Fold the rear seats down and this figure increases to 1,204 litres – in both configurations it’s quite some way behind the level of practicality the Hyundai Ioniq Plug-in serves up.

At least there is a little flap in the boot near the bumper where you can stow the charging cables, so they don’t eat into boot space any more and compromises practicality any further in this already flawed plug-in model.