The Toyota Prius Plug-In won’t set your pulse racing, but performance is adequate and refinement good 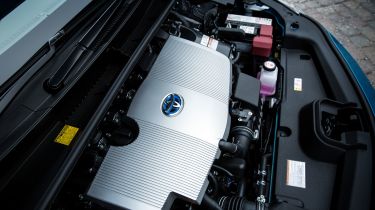 Extra boost from the twin electric motor setup aids performance, but the Prius Plug-In isn’t exactly fast – but then it’s not necessarily meant to be. Solid performance takes a back seat to a relaxed, refined approach to making progress.

Like the regular Prius, there’s just one powertrain for this plug-in model: a 97bhp 1.8-litre petrol engine supported by two electric motors, one producing 30bhp and the other putting out 71bhp. Despite this, due to the way the systems work together and are integrated with the CVT transmission, total output is limited to 120bhp. That’s enough for 0-62mph in 11.1 seconds and a 101mph top speed.

However, how the Prius Plug-In delivers the performance is more interesting. Acceleration from a standstill is strong thanks to the electric boost; it means there’s lots of power low down. The petrol engine helps at higher speeds to ensure you can keep up with motorway traffic.

The Prius uses a CVT automatic gearbox, which means it has no gears. You just select Drive and put your foot down. As long as you don’t get too excited the gearbox manages the electric and petrol engines well, making smooth progress.

If you need maximum acceleration though, the engine revs will rise and stay there as this type of gearbox holds the engine at the optimum revs to deliver the acceleration you’re asking for. The Power driving mode boosts response and therefore performance, while there are Normal and Eco modes that you can select as well, the latter dulls responses to prioritise efficiency.

There are also four modes for the hybrid system. These include Hybrid (HV) mode, which intelligently manages the switch between petrol and electric power, or combines both, EV mode, which prioritises electric driving, and EV City, which does the same but reduces how much power the motors will deliver. Battery charge mode uses the engine to drive the car forward and charge the battery on the move.

We found standard Hybrid mode works well, optimising the car for the type of driving you need. It also means refinement is strong – as long as you don’t work the engine too hard, of course.

The Prius’ steering is light and lacks any real communication, but thanks to the car’s platform, which features double-wishbone suspension, the Prius changes direction positively and offers enough support and body control in turns without upsetting the ride quality.

At speed, the car feels as though it floats over most road surfaces with a relatively light, compliant approach. Only big bumps really upset the body and cause a thunk through the chassis, but there’s still enough forgiveness from the suspension and so a good level of comfort.

This softer, more compliant side to the ride comes into its own around town, where grids, potholes and other bumps are prominent. However, while you don’t feel bumps all too badly, due to the car’s construction and the materials it’s made from, you do hear a fair bit of suspension and road noise as the car smothers bumps beneath you.

This just takes the edge off refinement, especially at high speed. If you ask for full throttle that naturally aspirated engine will also rev hard, filling the cabin with a coarse engine note. However, at low speed it’s fine, and from walking pace on electric power the Prius is extremely relaxed, as a hybrid car should be.