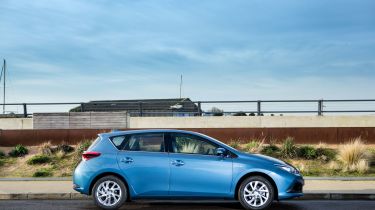 The Toyota Auris hybrid can't match the fuel-economy claims of its Toyota Prius Plug-In sibling, but certainly beat its petrol-powered stablemates when it was on sale.

Official testing saw it return up to 72mpg, compared to 59mpg for the regular 1.2-litre petrol automatic version. With a lesser appetite for fuel, CO2 emissions for the hybrid dropped to 91g/km, compared to 110g/km for the petrol car.

The closest non-Toyota rival to the Auris Hybrid was the Hyundai Ioniq Hybrid, which follows a very similar concept to the Prius.

As such, it was developed with fuel efficiency in mind from the outset, whereas the Auris was designed first and foremost as a practical family car. It's therefore fair to overlook the greater fuel-economy figure of the Hyundai, whose 83mpg rather eclipsed that of the Auris.