As with any small electric car, the Smart EQ ForTwo Cabrio will cost mere pennies to charge and run 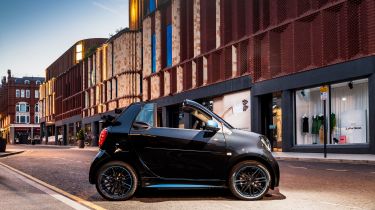 It may not come as a surprise to learn that Smart charges more for the EQ ForTwo than it does the standard petrol Cabrio. However, if its short range is sufficient for your daily commute – and you like the idea of zero-emissions driving with the wind in your hair – then it’ll save you money in the long run.

As this is an electric car, there's no road tax (Vehicle Excise Duty) to pay. The EQ ForTwo Cabrio falls into the lowest company-car tax band, resulting in rock-bottom VED rates. If you live in or near London and regularly drive into the capital, you’ll be pleased to know it's exempt from the £11.50 daily Congestion Charge.

Insurance groups for the Smart EQ ForTwo Cabriolet are reasonable, with all versions falling into group 15.

The Smart EQ ForTwo Cabriolet comes with a three-year/unlimited-mileage warranty. Once this expires, the battery is covered for a further five years (eight years in total). It shows the confidence that parent company Mercedes has in its electrified city car, as it’s the same warranty offered on the S-Class limousine. All Smart models also come with a 12-year anti-corrosion warranty.

When your Smart EQ ForTwo Cabriolet needs servicing will depend on how old it is and how many miles you cover – as every version is subject to a flexible service schedule. Owners have the choice of paying for servicing outright, or monthly via Smart ServiceCare. Prices start from £20 per month.

As the Smart EQ ForTwo Cabriolet is fully electric, it's exempt from road tax (also known as vehicle excise duty, or VED).

Electric cars tend to perform quite poorly when it comes to depreciation, and the Cabriolet version of the Smart is even worse off than the fixed-roof Coupe on which it's based.

While that car will retain between 34 and 37% of its value after three years and 36,000 miles, the Cabriolet holds on to just 33-35%. Ironically, the petrol Cabrio is actually the most desirable Smart on the used market, retaining up to 46% of its price after three years.