The Audi is cushy and comfortable, but the Jaguar is in another league, offering sportscar-like performance and driver reward 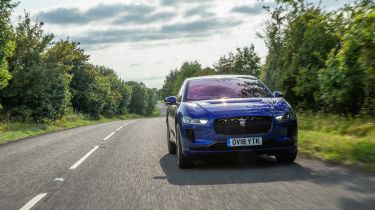 These two all-electric SUVs are more closely matched on paper than they feel on the road. They both have dual electric motors delivering four-wheel drive, and they have similar power outputs: the Jag packing 395bhp and 696Nm of torque, and the Audi 402bhp and 664Nm.

In practice, the Jaguar always feels faster and more responsive. This is in part thanks to it being around 300kg lighter. For context, that’s a grand piano’s worth of weight saving, and that piano makes a big difference.

The I-Pace tucks into corners and fires out of the other side, offering playful but accessible handling that’s easy to enjoy and appreciate whether you’re navigating Milton Keynes or the Stelvio Pass.

The Audi has a far more stoic, laid-back attitude. Standard air suspension means there’s a lot more body movement and a tendency to heave and wallow over undulations and awkward cambers.

The wheels can rebound quite harshly in bigger potholes with these 21-inch alloys fitted, but most of the time it feels cushy and comfort-oriented. There’s none of the willingness that you get in the Jag; the Aud is happy to mooch along, soaking up any scruffy surfaces and making impressively quiet, pillowy progress.

Stick it into Dynamic mode and it’ll tighten up its body movement and deliver grippy, neutral cornering, but it’s not a car you’ll be yearning to drive unless you’ve got a persistent headache and require some peace and quiet.

The performance of these two cars only backs up the disparate characters. We found the Jag would do 0-60mph a full second faster than the Audi, at 4.4 seconds, and even the 30-70mph mid-range sprint is despatched in 3.7 seconds, compared to the Audi’s 4.3 seconds.

Let’s get something straight. That makes both of these cars fast. The Audi is a 2.5-tonne SUV, but 0-60mph in 5.4 seconds still makes it faster than a BMW X5 xDrive40d. And the Jaguar isn’t just faster in a straight line, it's lighter, nimbler and more agile in every way. Yet it's also comfortable. Firmer than the Audi, yes, but not restless or crashy.

You can add optional adaptive dampers (£800) or air suspension (£1,100) to the I-Pace, and if you go for HSE with big wheels, we’d say the air suspension that was fitted to our test car is worth adding. We've driven a lower-spec I-Pace on standard suspension, however, and it’s still thrilling without sacrificing its easy-living commuter capabilities. Just stick to smaller wheels if you don’t want to pay for additional suspension upgrades.

Our car, with its air suspension, was damped well enough that even with huge 22-inch wheels it still covered broken-up town roads with impressive fluidity, so while you’re always more aware of the road surface in the Jaguar, it’s never anything but a smooth and enjoyable daily drive.

On top of that, the I-Pace's regenerative braking system is a little better, with the two phases offering heavy enough braking that you can drive on one pedal around town, while the other works well for faster roads. 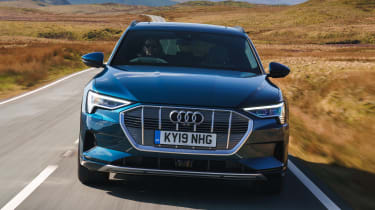 Mind you, the Audi has the advantage of steering-wheel paddles that allow you to increase or decrease the regen braking force as you wish, but its default mode introduces almost no regeneration unless there’s a car in front, when the radar system will up the braking force.

Both systems work effectively enough given that they bleed in smoothly when you ease off the throttle, but we’d favour stronger regen braking options for the Audi, while the Jaguar would benefit from paddles to allow easier swapping between modes.

Both of these cars get autonomous emergency braking that'll stop the car if it senses an imminent collision with another vehicle, pedestrian or cyclist, and they’ll also apply the brakes from motorway speeds. Adaptive cruise control, lane-keeping assistance, traffic-sign recognition and a parking camera are standard on both, as is a full suite of airbags – albeit not including driver’s knee airbags.

The Jaguar does surpass the Audi for safety kit, as in HSE spec it includes blind-spot monitoring and a 360-degree parking camera with parking aids, both of which are optional on the e-tron.

Both scored five stars in Euro NCAP crash tests. Notably, the I-Pace is available with an optional space-saver spare tyre, where the e-tron is only offered with a tyre repair kit.