The e-2008 boasts an attractive dashboard design, quality materials and lots of equipment, but the touchscreen software feels clunky 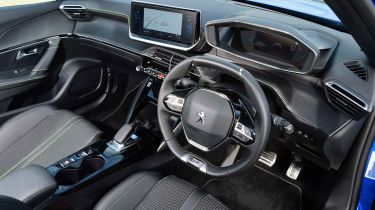 The Peugeot’s angular dashboard is great, with a nice combination of metal-finish switches and dense-feeling fabrics and plastics making it nice to look and to use. In all but entry-level cars, you also get digital dials with a 3D effect that makes the speed pop out more from the rest of the screen information, so it's easier to read at a glance. This has been lifted from the e-208, and while it sounds fussy, it works well in the context of Peugeot's technology-focused dashboard.

On the downside, the front seats could be more supportive and visibility to the rear three-quarters is a little restricted, while the small steering wheel and dash-top dials can make it awkward for some drivers to find a natural-feeling driving position that gives a clear view of the speedometer.

The Peugeot’s dashboard looks appealingly angular and modern, and the variety of textures and sense of quality make this one of the classiest-feeling cabins in the class. But some may not like the slightly busy feel and it’s not the most logical of dashboard layouts to get used to.

We particularly wish that air-conditioning temperature adjustments didn’t require prodding through the touchscreen menus and leaving the navigation screen. Despite that, the general finish and appearance of the Peugeot’s cabin will be one of its biggest selling points.

Even the entry-level e-2008 Active is well enough equipped to satisfy many buyers. It gets 16-inch alloy wheels, climate control, a leather steering wheel, rear parking sensors and partial LED headlights as standard. Many will probably step up to mid-range Allure trim, since that adds roof bars, an upholstery upgrade and a variable boot floor among other extras and starts at just over £31,000.

GT Line gets the chequered grille (always body-coloured on the e-2008), as well as a contrasting roof, heated front seats, a larger 10-inch touchscreen, a reversing camera and full LED headlights. It promises to be one of the most popular choices, despite costing almost £33,000. Top-spec GT adds even more, with adaptive cruise control, blind-spot assistance and a panoramic sunroof among the extras, and while it’s expensive at a smidge over £35,000, it's still cheaper than longer-range alternatives like the Kia e-Niro, if more expensive than the shorter-range MG ZS EV.

Every e-2008 gets lane-keeping assistance, traffic-sign recognition and autonomous emergency braking, but only Allure and up get a radar-based system that functions at night and senses cyclists as well as pedestrians. 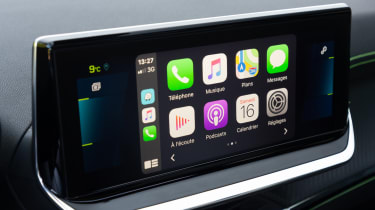 Up front, the dashboard is dominated by a big touchscreen (seven inches on lower-spec cars, 10 inches on GT Line and GT) that offers all the functionality you’d expect, including multiple USB points, navigation with charging-point search function, Apple CarPlay, Android Auto, digital radio, Bluetooth and – in GT Line and above – wireless phone charging.

It’s not the fastest-responding screen, nor does it have the best graphics in the class, but it’s a comprehensively equipped system nonetheless. The standard seven-inch screen has all the functions you could want, but the graphics (even on the bigger 10-inch screen) are a bit grainy and the menus can be a faff to navigate.

Simple things like turning the sat-nav voice commands off can be tricky, and ultimately the system lags behind those of many rival brands, including Kia, Hyundai and Volkswagen. We’d like separate controls for the temperature and the fan – like those you’ll find in the new Citroen e-C4 – but at least automatic climate control is standard on all electric versions of the e-2008.

All models allow access to an app that allows you to control the car’s charging and temperature from your phone, too.