The e-2008 is fit for purpose; the smooth electric drive makes it effortless to drive 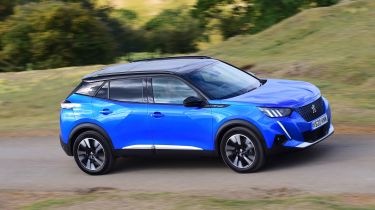 The Peugeot e-2008 is perfectly inoffensive to drive, with light but predictable steering and enough gusto to make it feel punchy from a standstill. But the e-2008 has myriad talents, with that quiet electric powertrain translating into strong refinement, even on the motorway. The motor does run out of puff at the top end, but you never feel like you’re holding up slower-moving traffic.

The ride is pretty good, too. We had concerns about the 18-inch alloys (standard on GT Line and GT cars) when we first drove the car in Europe, but on UK roads the wheel and damping combination appears to offer enough cushion to absorb all but the worst lumps and bumps. You’ll still need to be careful not to hit a pothole mid-corner, as this can unsettle the car enough to have the traction-control light flashing.

Peugeot has only released an estimated 0-62mph time of nine seconds for the e-2008 so far, while top speed is capped at 93mph to preserve battery life. On the road, the Peugeot is uninspiring but perfectly adequate to drive. There are various drive modes on offer, including a Sport mode that noticeably sharpens up throttle response and steering weight, while Eco will eke out a few extra miles but can make the throttle feel a little too unresponsive. The default Normal mode strikes the happy balance you want, and makes the Peugeot a pleasant car to drive.

There are two levels of brake regeneration. The default mode is very subtle and barely any stronger than the engine braking you experience in a petrol or diesel car. You trigger the heavier regeneration mode by tugging the gearlever backwards into its ‘B’ setting, and, while there’s very noticeable drag when you lift off the throttle, the system still bleeds in smoothly and is easy to modulate once you're used to it. It’s not really strong enough for the 'one-pedal' driving that's possible in a Nissan Leaf, however.

As with performance, the Peugeot goes round corners just fine. It’s not going to thrill, but it feels secure and predictable, with enough grip to inspire confidence. The driver's seat is comfortable and visibility is good, so it’s easy to enjoy the relaxed, easygoing progress on offer in the e-2008.

The steering can feel a little light and quick when you steer into a corner initially, and too keen to self-centre on the way out as well, but you get used to it and, of course, the electric motor’s power delivery is seamless and soothing. The e-2008 isn’t as agile as some of the best petrol SUVs, but the effortlessly quiet performance will soon win you round.