Don’t be alarmed by the four-star Euro NCAP rating: crash tests are becoming ever-harder to ace and the Peugeot e-2008 is still a very safe car 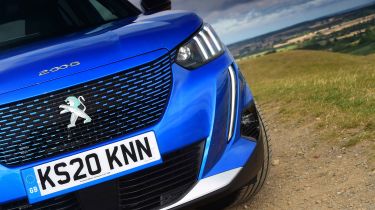 The petrol-powered Peugeot 2008 scored four out of five stars in Euro NCAP crash tests, which sounds alarming, but shouldn’t be. The tests were recently overhauled and made much more stringent, so it's not unusual to see cars introduced from late 2019 onwards receive four stars. Where the Peugeot fell short was on pedestrian impact safety, for which it scored 62%, and safety assistance (68%).

It’s too early to comment on the long-term reliability of the e-2008, as it sits on a completely new platform and has an all-new powertrain. But electric cars have far fewer moving parts than combustion-engined vehicles, so they're typically far more reliable.

Buyers should take confidence in the fact the 2008's bigger brother, the Peugeot 3008, finished second overall in the 2020 Driver Power owner satisfaction survey, however. The brand placed an impressive eighth in the manufacturer standings, too.

The only shortfall on the safety-assistance front is that while the entry-level e-2008 Active trim level gets camera-based autonomous emergency braking (AEB) that'll automatically brake at city speeds if it senses an imminent impact with a pedestrian or vehicle, higher trims get a more advanced radar-based system that works at night and also senses cyclists.

The e-2008 is still very well equipped as standard, as it gets lane-keeping assistance, traffic-sign recognition and driver drowsiness monitoring, as well as the standard traction-control and six airbags. It’s a shame that adaptive cruise is only standard on top-spec GT Line trim, and we’d also like to see a driver’s knee airbag and a space-saver spare wheel introduced. Currently, there’s only space for a tyre repair kit.