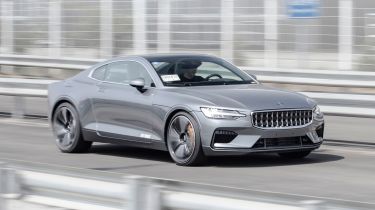 The new, plug-in hybrid Polestar 1 is nearly ready for production, with the Volvo spin-off brand now inviting its first customers to spec their cars ahead of delivery.

The final prototype vehicles are being used to test the firm's production methods at its new factory in Chengdu, China. DrivingElectric has driven one example ahead of sales beginning later in 2019.

“It’s great to see how we have progressed from showing the Polestar 1 for the first time in 2017, to now having our beautiful new manufacturing facility up and running,” said Polestar CEO Thomas Ingenlath.

“Now we enable our loyal customers to secure their final specification for their car, knowing that we are going to give them an awesome GT that is built to the highest levels of quality, fit and finish.”

Polestar has a long and distinguished history of developing fast Volvos, but will become a carmaker in its own right with the arrival of the Polestar 1.

It’s also unique in that it'll be the company’s only plug-in hybrid: subsequent cars are already in the pipeline, but they – and every other Polestar – will be pure-electric vehicles. High performance will be a common theme among them all.

This may be billed as the first car from Polestar, but Volvo’s influence is obvious in the way it looks. Effectively, it’s a shorter, 2+2 coupe version of the Volvo S90 saloon. The grille and ‘Thor’s Hammer’ headlights certainly look very like what you see on the front of everything from the V40 to the XC90.

Inside, too, the arrangement of the dashboard – with its large, portrait touchscreen – the air vents and even the gear selector are all pure Volvo. Mind you, that’s no bad thing, as Volvo makes some of the smartest and most comfortable interiors on the market. 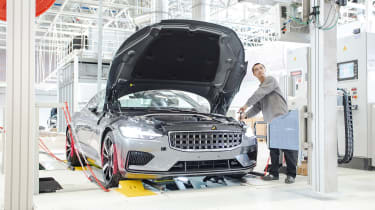 The one thing you'll notice from these pictures is that steering wheel is on the left, as it will be in every Polestar 1. The company is only planning to build 600 Polestar 1s a year and none of them will be right-hand drive.

Hailed as an ‘electric performance hybrid’, the Polestar 1 certainly has the vital statistics to back up the name. It combines a turbocharged 2.0-litre engine that powers the front wheels with a starter-motor generator and electric motors to power the rear wheels, and the result is a total output of 599bhp and a 0-62mph time of just over four seconds.

And with a 34kWh battery, the company says the Polestar 1 can run for 80 zero-emission miles at motorway speeds.

To cope with the performance, the Polestar 1 has active suspension developed by specialist Ohlins that can be configured by the driver. According to Polestar, the suspension can react to changes in the road surface in less than two milliseconds.

If you want to, you can buy a Polestar 1 outright – from £139,000 – but the car will also be available through a subscription service.

Owners will take out a two or three-year subscription, with the monthly payment also covering insurance and maintenance. At the end of the period, the car is replaced by a new model, with the old one refurbished and being offered as a used car.