The Lexus RX L 450h offers seven seats, but it works best as a five-seat SUV 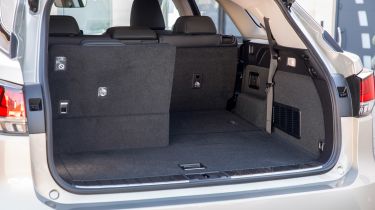 Lexus has added 110mm to the RX to create the RX L, but while this creates just enough space for a pair of extra seats, this is more of a 5+2 SUV in the style of the Land Rover Discovery Sport than it is a true seven-seater like the Volvo XC90.

The problem is, the dimensions don’t translate to an overly large interior and boot. The standard Lexus RX isn’t particularly spacious inside, so even though the RX L is 110mm longer, it remains a tight squeeze at the back. One of the problems is that the RX was designed with the hybrid model in mind, so the boot was designed around the presence of the battery in the boot.

The rearmost seats create little more than a +2 setup, rather like what you’d find in the Land Rover Discovery Sport. Even the smallest of passengers will find it claustrophobic in the back, while getting there involves sliding and tilting the second row of seats.

With the middle row pushed forward, there’s just enough room for tiny legs, but this simply eats into the space available to those sat in the middle. At best, the RX L 450h is a seven-seater for occasional use only.

On the plus side, the third row of seats can be folded down independently and electronically via a button located on the left-hand side of the boot. The seats fold down and slide into position with typical Japanese efficiency.

There’s also a pair of cup-holders between the third row of seats, which also benefit from independent climate-control settings. Space is limited back there, but the passengers won’t be feeling left out of the party.

Up front, the RX L boasts two cup-holders between the front seats, along with another pair on the foldaway central armrest in the back. There’s also a large central bin, space for a smartphone beneath the dashboard and big extendable door pockets.

In summary, the RX L works best as a five-seater, with the rear passengers benefitting from more legroom than there was in the old RX, comfortable limo-like seats and a flat floor. Stick a pair of children in the very back and you might begrudge them stealing your life of luxury. 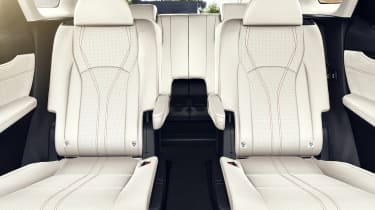 With the third row of seats, the RX L 450h boasts 495 litres of luggage capacity, which is 42mm more boot space than you’d find in the five-seat RX. Fold the middle row down and this increases to 966 litres. These figures are far from impressive, especially when you consider that the Audi Q7 offers 770 litres of boot space in five-seat mode, while a Volvo XC90 offers 451 litres with all seats in place.

In common with most SUVs, there’s a high boot lip which can make loading heavy items a struggle, but an electric tailgate is standard across the RX L range.