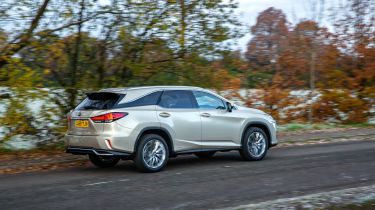 Unlike electric or plug-in hybrid vehicles, the Lexus RX L 450h isn’t designed with pure-electric range in mind, but the hybrid system is exceedingly clever at maximising the overall petrol-electric range.

An ‘EV mode’ switches the vehicle to all-electric operation, shutting down the petrol engine until the limit of battery charge or speed is reached. This makes it ideally suited to town and city driving, although you shouldn’t expect much more than a mile of electric range before the battery needs recharging.

Its plug-in hybrid rivals do have the advantage of offering enough electric range for a typical daily commute, which might make them more attractive to some buyers. For others, the ‘self-charging hybrid’ nature of the RX L 450h might be enough to tip the balance in favour of the Lexus.

Claimed fuel economy is for the Lexus RX L is 34mpg; slightly less than the 35mpg achieved by the standard, five-seat RX. All things considered, this is a small price to pay for having the benefit of two additional seats.

On paper at least, this makes the RX L 450h appear less frugal than its plug-in hybrid rivals, but this is only half the story. The Volvo XC90 T8 claims 113mpg, but in reality, the economy is likely to be closer to that of the Lexus RX L without regular charging.

Based on the claimed fuel-economy figures and the RX L’s 65-litre fuel tank, a range of between 600 and 700 miles is possible but you’d need to drive with care to achieve this. Regular use of the ‘EV mode’ will add a few extra miles to the tank.