The Lexus RX L isn't fast, but the seven-seat SUV is at least comfortable and refined 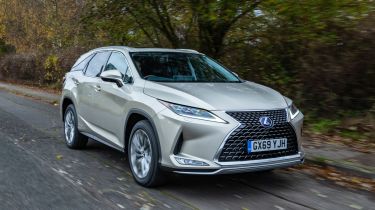 The RX L 450h isn’t an SUV to be hurried, but a smooth hybrid system, an ability to cruise the city streets in electric mode (briefly), low noise levels and a high degree of comfort make this a terrific long-distance cruiser.

There’s one powertrain available: a familiar 3.5-litre V6 petrol engine mated to a pair of electric motors (one at the front and one on the rear axle). They provide a combined output of 308bhp, which is just about adequate for this heavyweight SUV, but nothing more.

Top speed is a modest 124mph, while a 0-62mph time of eight seconds highlights how sluggish the RX L 450h can feel. This is three tenths slower than the five-seat version, with the CVT automatic transmission only serving to blunt the car’s performance.

But that’s not the end of the story, because more leisurely progress is rewarded with a smooth and relaxed drive, especially from a standstill, with the RX L pulling away in ‘EV mode’ and staying that way for a while until the petrol engine kicks in.

The switch from electric to petrol is almost seamless, and great credit must be given to the hybrid system. All-electric and plug-in hybrid systems might be in vogue, but nobody does ‘self-charging hybrid’ vehicles quite like Lexus.

The Lexus RX L 450h is a big car – five metres long and weighing 2.2 tonnes – but it doesn’t feel unwieldy in town. There’s a certain amount of smugness involved with pulling away in electric mode, and it’s rather fun attempting to stop the petrol engine from starting for as long as possible.

Not that you can get too far in electric mode: the tiny battery will deliver around a mile of electric range before it needs recharging. Fortunately, the hybrid system is constantly switching between modes, with regenerative braking topping up the batteries. You can set the infotainment system to show you where power is being directed and by what.

In common with the smaller RX 450h, the seven-seat L majors on comfort rather than driver appeal, so hard cornering and rapid acceleration are best avoided. It holds on well enough, but the vague steering, body lean and sheer size of the vehicle don’t inspire much in the way of confidence.

Suspension updates – introduced as part of a facelift in 2019 – haven't cured the body lean, nor is there much fun to be had on a fast b-road. You can switch driving modes if you like, but they make little difference to the driving experience. We’d recommend sticking the car in ‘Normal’ mode and leaving it there.

It’s no driver’s car, then, but as a refined, relaxed and comfortable long-distance cruiser, the RX L 450h is as good as its German and Swedish competitors.