Company-car tax for hybrids is less than for diesels, but otherwise there are few financial incentives to pick the NX 300h over a diesel or plug-in 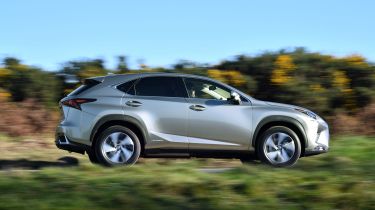 With prices ranging from around £35,000 to around £47,000, the NX 300h looks pretty competitive against traditional non-hybrid rivals like the BMW X3 and Audi Q5, especially when you take into account its high equipment level. Plug-in hybrid rivals tend to be more expensive again, so the NX 300h remains an attractive option for buyers considering their green options.

Unfortunately, the Lexus hybrid doesn’t qualify for the plug-in car grant when you purchase it and its CO2 figure makes it liable for the London Congestion Charge, too.

But the CO2 figure does provide an incentive for company-car drivers, especially if they’re comparing Benefit-in-Kind (BiK) rates with those of traditional diesel SUVs. The entry-level front-wheel drive NX 300h’s 35% compares favourably with 37% for the Volvo XC60 D4 Momentum, for example.

Plug-in hybrids fare much better, of course, with the Volvo XC60 T8 falling into the 13% BiK band. Fuel economy may also be a factor when comparing a "self-charging" hybrid with either diesel or plug-in hybrid rivals. The former are likely to offer cost savings at the pumps if you drive high mileage, whereas the latter may rarely visit the pumps at all if you drive a limited number of miles.

As there’s only one engine and a handful of trim levels, it’s not surprising that the Lexus NX falls into a relatively small insurance-group range. Depending on specification, it’s in group 29 to 30, while the Volvo XC60 and Jaguar F-Pace ranges both start at group 31.

The standard Lexus three-year/60,000-mile warranty applies to the NX 300h, but you get five-year cover on the hybrid powertrain components, which includes the battery.

The Lexus NX line-up should retain between 50 to 55% of its value after three years and 36,000 miles, which is a little better than a diesel BMW X3 and most Audi Q5s.