Fuel and company-car tax bills will be low for the Evoque P300e, but insurance and servicing will be similar to other Land Rover models 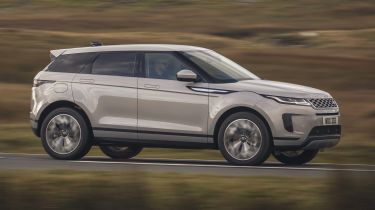 Reduced running costs are the primary driver of plug-in hybrid sales for most people, and the Evoque hits the numbers it needs to in terms of company-car tax (falling into the 10% BiK band) and potential fuel economy. Road-tax, insurance and servicing bills won't be vastly different from those of any purely petrol or diesel-engined premium SUV, however.

The Evoque P300e hybrid falls into insurance groups 38 to 40, depending on the exact trim level chosen. That means it's likely to cost around the same to cover as its close rivals the Audi Q5 hybrid (groups 40-43) and BMW X3 hybrid (groups 38-39), but premiums should be less than for the Mercedes GLC hybrid (which starts in group 44).

Like all new Land Rovers, the Evoque hybrid is covered by a three-year/60,000-mile warranty from new. That's pretty much par for the course for premium brands, and encompasses the most common three-year duration of a finance or company-car agreement. Private buyers who intend to keep their car for longer may prefer the five or seven-year cover on offer from less prestigious brands such as Toyota and Kia, respectively.

The Evoque hybrid has a fairly generous service interval of two years or 21,000 miles, whichever comes up sooner. Land Rover allows owners to purchase service plans for their cars, so costs can be locked in at a fixed rate for the duration of the plans, with payment made up front in a lump sum or spread out with a monthly direct debit.

As the Evoque P300e is a plug-in hybrid and therefore classed by the government as an 'alternatively fuelled vehicle' (AFV), it gets a £10 annual road-tax discount on the standard rate of £150. But as it also costs more than £40,000 to buy in any trim level, it's slapped with a £325 annual surcharge the first five times it's taxed. So your annual bill during that period will be £465.