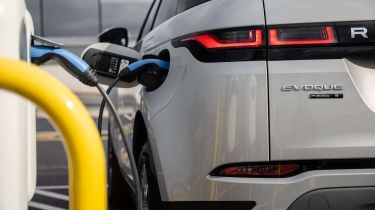 The Evoque PHEV returns fuel-economy, CO2 emissions and electric driving range figures broadly in line with the majority of its rivals. Buyers are unlikely to choose it for running-costs alone, with the appeal of the Range Rover badge and the Evoque's considerable style and luxury more likely to clinch the deal. But the numbers stacking up does mean people can buy one with their head as well as their heart.

A 34-mile electric range, 44g/km of CO2 and up to 141mpg fuel economy are the official on-paper numbers for the Evoque P300e plug-in hybrid at launch. Even better figures are promised from an even more eco-focused version that'll be added to the range in due course, but for now those numbers are sufficient to get it into the all-important 10% Benefit-in-Kind (BiK) company-car tax band that the majority of potential plug-in hybrid buyers are looking for.

Of course, the numbers achieved in real-world driving will vary; you need to start every journey with a fully topped-up battery to even have a hope of coming near that 141mpg figure, but if the majority of your trips are short, local affairs for shopping, school runs and other errands, you should still be only a very occasional visitor to your local petrol station's forecourt.

From a 7kW home wallbox (likely to be the most common charging method for most Evoque hybrid buyers), the P300e will charge from zero to 80% battery capacity in under 90 minutes (or just over two hours if you want to get it all the way to 100%). Unusually for a plug-in hybrid, the Evoque PHEV can also take charge at faster speeds from a public DC rapid charging station. Using one of these, you can be fully replenished in just 30 minutes, so a lunch-break stop on a longer journey is entirely feasible.