The Evoque P300e hybrid is no featherweight, but the electrified drivetrain hasn't spoiled its solid and comfortable driving experience 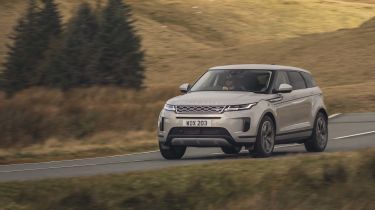 The Range Rover Evoque plug-in hybrid marks the debut of a new engine in the Land Rover range. The petrol portion of its 'P300e' drivetrain is a 1.5-litre, three-cylinder version of the 2.0-litre, four-cylinder petrol engine used in many Jaguar and Land Rover models up to now. It makes 197bhp on its own, and when combined with the 107bhp electric motor, total power output is 304bhp and 540Nm of torque.

A series of driving modes give you a degree of control over how the petrol and electric power is used: you can force the car to stay in electric mode, or save the power in the battery for use later in your journey. It's perhaps better, though, to just leave it in the standard hybrid mode and let the system work out for itself the most efficient way to mix engine and motor. Unlike some plug-in hybrids, there's no 'battery charge' mode where the engine juices up the battery – Land Rover reckons this is just inefficient use of petrol and so the Evoque does without.

That considerable power output is enough for a 6.4-second 0-62mph time for the Evoque hybrid (or 6.1 seconds to 60mph). Running under electric power alone, maximum speed is a motorway-friendly 84mph, while bringing the petrol engine into play raises that to 132mph.

The addition of a heavy and complex plug-in hybrid drivetrain into a (relatively) small SUV like the Evoque does spark concerns that it could spoil the driving experience somewhat, but based on our time with the car, such worries are unfounded, despite it now weighing in the region of two tonnes.

The electric motor is both quiet enough to keep things serene in the cabin and powerful enough to take care of the majority of driving in urban environments on its own, without having to call on the petrol engine. Like all plug-in hybrids, if you press the accelerator hard enough, the engine will 'wake up', but it does so very smoothly in the Evoque – more so than in its close rival, the Volvo XC40 Recharge.

Engine noise does begin to become a factor at high revs, but with the very smooth eight-speed automatic transmission in play, there's really no need to push things too much to make good progress. Overall, the Evoque P300e hybrid is smooth, refined and comfortable at nearly all speeds – just as a 'baby Range Rover' should be.

The balance between ride quality and control of body lean in corners is well judged, but the standard caveat of avoiding the larger alloy-wheel sizes to ensure maximum comfort is applicable to the Evoque. We haven't had the opportunity to put the Evoque hybrid's off-road prowess to the test yet, but Land Rover claims the instant torque of the rear-axle electric motor only serves to make the car's Terrain Response system even more effective than before.