The Kia Niro PHEV is not the most engaging or quickest car of its type, but it's relaxing and relatively comfortable to drive 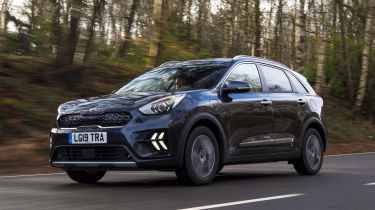 Unsurprisingly, the plug-in Niro drives very much like the hybrid version of the car, which has the same 1.6-litre engine. So, the PHEV is pretty comfortable around town, happily juggling between the two power sources for the best possible efficiency.

Overall, the Niro PHEV isn’t the most engaging car to drive. The Countryman, in particular, will be more enjoyable for enthusiasts, while the Niro works best if you settle back into a more relaxed driving style. Unfortunately, no matter how relaxed you are, there’s no getting away from the firm-ish ride. 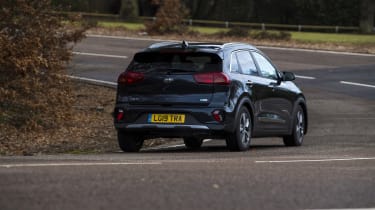 The Niro PHEV has the same 104bhp 1.6-litre engine as the regular hybrid, paired with a more powerful electric motor for a combined output of 139bhp. As a result, its 10.4-second 0-62mph time is a little quicker than the hybrid’s, but at the same time the PHEV is quite heavy and feels sluggish to drive as a result.

The plug-in's 10.4-second 0-62mph time is a little quicker than the hybrid’s, but it's still quite heavy and feels sluggish to drive. For most eco-conscious SUV drivers, it should be quick enough, but enthusiasts are likely to plump for the MINI Countryman Cooper S E ALL4, which is faster for not a lot more money.

To make matters worse, in car where you want electric power as much as possible to keep your running costs down, if you press the accelerator firmly, the petrol engine will kick in quite readily. Learn to be more gentle and the Niro PHEV becomes more satisfying, picking up speed in near-silence.

The engine can also be quite noisy when you want that kind of acceleration, which can be quite wearing. Again, the result is that you instinctively settle back into a more relaxed driving style.

Unsurprisingly, the plug-in Niro drives very much like the hybrid version of the car, but there are some differences. And most of them are not to the benefit of the PHEV. In particular, that’s because the PHEV is heavier than the standard hybrid. So, as well as feeling more sluggish, it also has firmer suspension that gives it a harder ride. It’s something you notice most at relatively low speed around town, so if you spend much of your motoring life in the city, that may be a problem.

Instead, the Niro feels most at home on a steady cruise along a main road. The ride smooths out as your speed picks up, and you won’t notice the lack of feel in the steering that discourages you from pushing on down a more twisty road. That’s a bit of a shame, because the stiff suspension does at least give good body control. So, you won’t get thrown around too badly if you do decide to get a bit ‘enthusiastic’ behind the wheel.