Boot space in the Honda e isn't great, but otherwise practicality is good by small-car standards 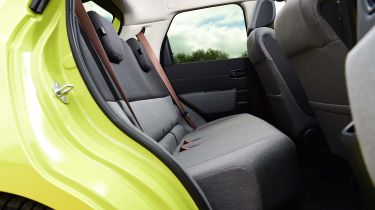 The Honda e's practicality is adequate by city-car standards, with lots of nifty touches inside, including a phone pocket below the USB ports and a pull-out cup-holder for the driver.

There is dedicated cable storage, but the boot is fairly tiny – a Skoda Citigo-e iV has usefully more storage space. However, the Honda also offers better rear passenger space, and – unlike the three-door MINI Electric – five doors as standard.

There’s seating for four in the Honda e, and a surprising amount of leg and headroom that’ll comfortably accommodate two adults behind a fairly tall driver. There’s no middle seat in the back, so it's strictly a four-seater.

The seats are a bit flat in the back, but for the short hops you’re likely to do, they're more than comfortable enough. Lots of light coming from the sunroof and windows helps, too. You sit upright, made possible by the tall roofline, which brings your legs back towards you, effectively creating more space in front. 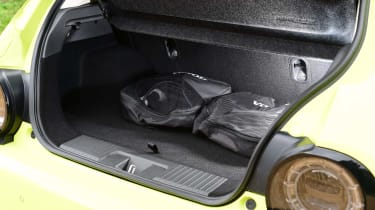 The Honda’s boot is rather small. One airline cabin-sized bag will take up the majority of the space, so pack light if you’re going away. However, there's cable storage under the boot floor and the seatbacks fold down (albeit in one piece) to extend the space.

That underfloor storage isn't big enough for both cables, so Honda supplies two bags. This eats into the already-small 171-litre boot, but remember that the short range means this isn’t a car designed for long trips, so its boot capacity should be perfectly adequate most of the time. Unlike some larger electric cars, there’s no storage under the bonnet, as that’s where the charging hardware is.