With room for eight and a 33-mile electric range, the Tourneo Custom hybrid is a good choice for city-based families or private-hire drivers 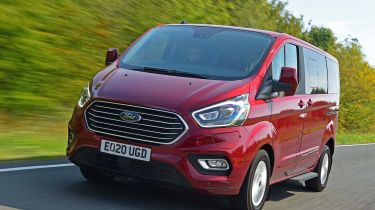 The Ford Tourneo Custom is the people-carrying version of the Ford Transit Custom, boasting seating for eight and plenty of space. Following on from the Transit's recent electrification, the Tourneo has followed suit, making it one of the few plug-in hybrid cars on sale with space for more than five people.

Power comes from a three-cylinder petrol engine that's intended as a range-extender, meaning it charges the car's battery as required, with the battery in turn powering an electric motor that drives the front wheels. That battery measures in at 13.6kWh, mounted under the flat floor. Total system output is 124bhp, but there's a healthy 455Nm of torque that helps pull it along nicely. The Tourneo feels faster off the line than an equivalent diesel as a result.

There are four – rather obviously named – driving modes to help get the most out of the Tourneo's drivetrain. Auto EV allows the hybrid system to charge the battery when it sees fit to maximise efficiency, EV Now is the fully electric driving mode, EV Later allows some battery charge to be held for deployment later in a journey, and EV Charge instructs the engine to charge the battery. The latter mode will have a detrimental effect on fuel economy, however.

When powered exclusively by electricity, the Tourneo is silent and relaxing save for some van-like wind and road noise; when the petrol engine kicks in, however, it drones as it runs the electric motor. There are two general drive modes – a standard mode and 'L', which introduces a greater regenerative braking effect. The latter is a bit jerky in practise and isn't all that pleasant to use. 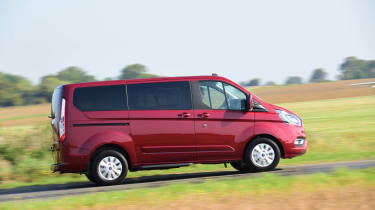 Buyers won't be overly concerned with how the Tourneo drives, however – large van-based MPVs are all about practicality. The Tourneo scores highly here, with six rear seats – four of which have ISOFIX points. Versatility is key: sliding doors mean access is easy, while the six individual seats in the back can be configured to suit your needs.

The middle row can face rearward or in the direction of travel, with the central seat on each row boasting cupholders and item trays on their reverse side. There are USB sockets for the second and third-row occupants, plus air-con outlets and roof-mounted controls for the passengers in the back. And if you need to carry a big load, all the rear seats can be removed entirely. Needless to say, if it's practicality and flexibility you need from your large plug-in hybrid, the Tourneo has most big SUVs beaten.

Up front, the dashboard boasts Ford's latest SYNC 3 infotainment, complete with Apple CarPlay and Android Auto connectivity. However, this screen can't be used to adjust the drivetrain, which is operated by a series of buttons. Standard equipment is good and a nod towards the van's intended private-hire market. Our test example had the optional leather seats – an £828 option – that are a must-have in our opinion; it's worth picking the £300 reversing camera, too.

Despite the Tourneo's plug-in hybrid status, the intricacies of its operation mean it's not the best choice if you spend a lot of time on the open road. Our on-test fuel economy was 25.8mpg – some way off the official figure. To make the most of the Tourneo's talents, you'll have to make sure you plug in regularly and make as much use of the regenerative 'L' mode as possible. It'll be a much happier story if you regularly undertake shorter journeys – that official 33-mile range was more like 20 miles in our tests, which should still be enough for most urban commutes, school-runs or drop-offs, or indeed urban taxi work.

Charging takes five hours and 30 minutes using the supplied three-pin cable; use a home wallbox and that figure improves, dropping to three hours. Sadly there's no rapid charging option, but this is a fairly rare feature on plug-in hybrids anyway.

One major downside is price: at £60,000, this is a very expensive car which, for private buyers, puts it in among some much more desirable machines from the likes of BMW, Mercedes and Volvo. However, few can match the Tourneo's practicality – apart from other van-based MPVs, that is.

That high list prices means high road-tax payments – £465 a year – as well as the likelihood of fairly steep insurance. Paired with running costs that could be expensive if you do lots of motorway miles, the Tourneo could be harder to recommend to some buyers who may still be better off with a diesel. It'll be less of an issue for company-car users, however, or those who spend most of their time in town on shorter trips. 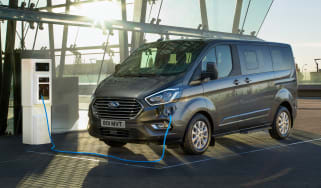