Citroen ami electric city car could be sold in the UK

The Citroen ami, a tiny electric quadricycle with a 44-mile range, has a 75% chance of being sold in the UK, according to bosses 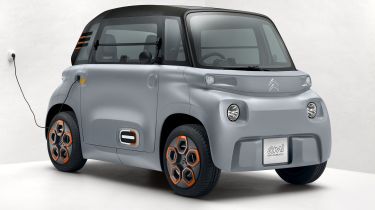 DrivingElectric has learned that the Citroen ami – a pure-electric city-car quadricycle – could be set for the British market, too. Citroen UK managing director Eurig Druce gave the chances of the ami going on sale in the UK as "seven-and-a-half" out of 10 – that's 75% and so bodes well.

"We’re in discussions, of course, with head office in Paris about the possibility of bringing [the ami] to the UK and our intention in the next two to three weeks is to evaluate feedback from customers that they see with the cars here on home ground," Druce said.

Citroen is currently operating a small fleet of ami models in the UK, with Druce himself getting behind the wheel: “It’s huge fun – it’s for a certain purpose, of course, but it meets that purpose perfectly,” he enthused.

To keep costs down, the ami would most likely be available only in left-hand drive if it was brought to the UK, but Druce does not see this as an issue: "Because of the nature of the vehicle and the fact that it’s not a very wide car then it doesn’t really mean much of a difference – you don’t feel like you’re driving a left-hand-drive car when you’re driving around in traffic."

Citroen ami on sale in France

Sales of the electric Citroen ami have already got off to a strong start in its home market of France, with the manufacturer saying 200 orders were received within hours of its sales website opening. All were processed online, with 85% involving some degree of customisation on the part of the buyer.

The ami is an electric quadricycle based on the AMI ONE concept, first seen at the 2019 Geneva Motor Show. It can charge from a domestic plug in three hours, and has a total range of 43 miles.

In addition to that headline price, Citroen will offer the ami under its Free2Move initiative, whereby you can rent the 2.4-metre-long electric car for as little as 26c (23p) per minute. Citroen claims the ami “is for everyone” whether you need the car “one minute, to one year and more – to share, to rent or to buy”.

With a 5.5kWh lithium-ion battery mounted under the floor, the ami can be recharged using the standard-fit cable located in the passenger doorway. The car will do almost 30mph, and has a tight turning circle of just 7.2 metres.

The two doors open in opposite directions; one is hinged from the front and the other from the rear. The wheels have been pushed right out to the corners for maximum interior room, while the standard panoramic roof further emphasises this feeling of space for the two passengers. To keep costs down, the side windows are opened and closed manually.

The AMI ONE concept vehicle was the star of Citroen's stand at the 2019 Geneva Motor Show. The brand described it at the time as a "popular, modern and timely response to new customer behaviour and the challenge of the energy transition in the city". 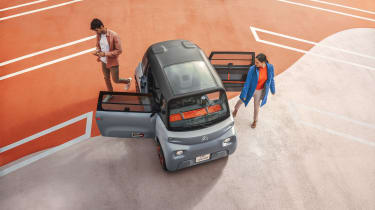 The ami is designed to offer maximum interior space with the smallest possible external footprint. Its boxy design gives plenty of headroom, while the large glasshouse should make for excellent visibility in and around town.

There are echoes of the original Citroen C4 Cactus at the front end, with separate daytime running lights and round headlamps. The same is true of the car in profile, where the firm’s designers have incorporated Airbump technology to protect the ami from parking dings.

Citroen says the ami is highly customisable and available in seven different ‘versions’. There are four main colours, which can then be bolstered by orange or grey accessory packs, as well as options like a smartphone clip or wi-fi dongle.

Arnaud Belloni, Citroen's global marketing and communications director, suggested that the ami will also be the basis of several special editions: "There is an enormous list of companies who want to work with [Citroen]," he told us. "The project is agile; it was born to add small limited editions very often".

There's space for two adults sitting side-by-side inside the ami, as opposed to one behind the other as in a Renault Twizy. The passenger seat is fixed, but the driver’s seat slides forward and back to “accommodate the tallest of occupants”. Citroen says there's a recess in the passenger footwell big enough for a carry-on-sized suitcase, as well as another storage area at the rear of the ami.

With zero emissions, the ami should enjoy unrestricted access to city centres as low-emissions zones and congestion charges become more prevalent in coming years. In France, order books are open now, with Spain, Italy, Belgium, Portugal and Germany due soon.