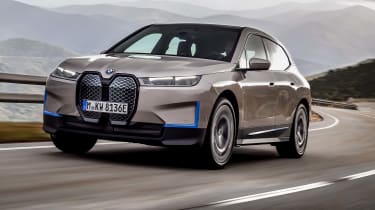 BMW has released the first official images of its upcoming iX electric SUV in production form. Set to go on sale in late 2021, the BMW X5-sized model was previewed by the BMW Vision iNEXT concept car and will be a rival for high-end luxury electric SUVs like the Tesla Model X and forthcoming Mercedes EQS.

According to its manufacturer, the iX's looks "combine the functionality of the BMW X5 with the dynamism of the BMW X6 and the visual impact of the BMW X7". It's about the same length and width as an X5 and about as high as an X6, but with large alloy wheels that call to mind the X7.

Unlike the recently revealed BMW iX3, which features only mild design changes from the combustion-engined X3 it's based on, the iX has its own design language – one that's likely to be repeated on forthcoming BMW electric models like the i4 saloon. But some familiar BMW design elements, such as the 'kidney' grille shape and twin headlights, remain.

The technology underpinning the iX will be also be used for a wide range of future BMW electric cars of various sizes, similar to the way the Volkswagen Group's MEB architecture forms the basis of models like the Volkswagen ID.3, Volkswagen ID.4, Cupra el-Born and Skoda Enyaq iV.

The iX is powered by the fifth generation of BMW's 'eDrive' electric drivetrain, with two electric motors generating a maximum power output of 496bhp, which is sufficient for a 0-62mph time of less than five seconds. Power is stored in a 100kWh battery and BMW reckons this will be enough for just over 370 miles of driving range before recharging is needed.

When it comes to charging, BMW says the iX will have the capacity to replenish its battery at speeds of up to 200kW, where such charging points are available. That would allow for a top-up from 10% to 80% capacity in less than 40 minutes, while charging fully from an 11kW home wallbox will take under 11 hours. In addition to making the electric drivetrain as efficient as possible, BMW has also put significant efforts into making the iX as light and aerodynamic as possible to make the best use of the battery's stored energy.

Aerodynamic touches include the overall streamlined body shape, flush doorhandles and slender door mirrors, as well as adjustable flaps built into the grille and other front surfaces of the car. These stay closed most of the time but can open when extra cooling air is required.

BMW reckons up to 40 miles of the iX's range can be attributed to those measures, while further benefits come from an optional sport package that adds 'Air Curtains' up front to direct air over the wheels without turbulence and 'Air Blade' at the rear to minimise the vacuum effect behind the car, adding another nine miles of range. The standard 20-inch alloys can also be upgraded to 21 or 22-inch 'Air Performance' drag-reducing wheels, promising another nine miles of added range.

Finally on the aerodynamic front, particular attention has been paid to sealing and smoothing the underbody where possible, gaining another six miles of range in the process, according to BMW. Elsewhere, a variety of materials have been used in constructing the iX's body in order to keep weight as low as possible, including high-strength steel, aluminium, thermoplastics and carbonfibre-reinforced plastic.

In addition to its strong claimed performance, range and charging figures, the iX also incorporates a swathe of automated driving and connectivity features, which are likely to 'trickle down' to smaller and cheaper BMW electric models in time.

BMW says the iX has 20 times the on-board computing power of previous models, allowing it to process double the amount of data coming from cameras and sensors mounted around the car. This will allow for a very high level of automated driving capability and an extensive range of driver-assistance and collision-avoidance technology.

According to BMW, the iX has been designed "from the inside out" with prime consideration given to the passenger environment. As there's no large engine block to fit in up front, the windscreen pillars are further forward on the iX than they would be on an equivalent combustion-engined car. This pays dividends when it comes to interior space.

A large panoramic glass roof and no central tunnel to intrude on legroom are said to contribute to a spacious and airy feeling inside the iX, while on-board technology has been designed to be unobtrusive and user-friendly – something BMW calls a 'shy tech' approach. The iX also features a hexagonal steering wheel – a first for BMW – and a head-up display.

The centrepiece of the iX's interior is a slim instrument panel, incorporating a large curved display screen – the first time such technology has been offered in a production BMW. The screen appears freestanding from the occupants' point of view and is made from anti-reflective glass, so does not need to be shielded from sunlight.

Voice control and touchscreen functionality can be used to operate most functions, but drivers can also use the familiar BMW iDrive control wheel to navigate menus and select options if they prefer. The wheel is integrated into a centre console that features a control surface divided up by 'feeler bars' instead of conventional separate buttons.

The space gained from the lack of a central tunnel is also used to create additional storage in the centre console; the lower level houses a pair of cupholders, a smartphone tray with inductive charging, a 12V power connection and two USB ports. The centre console armrest opens to reveal an illuminated storage compartment.

The sports front seats can be specified with integrated speakers, while in the rear BMW is promising a "lounge-style ambience," with a bench seat designed for three occupants, and the two outer seats getting integrated head restraints. Coat hooks, tablet computer mounts and USB charging ports are all fitted for rear-seat occupants to use, while the rear seats split and fold in a 40:20:40 ratio to allow boot space to be extended.

A number of interior upholstery options will be available, including a textile-and-microfibre blend, Sensatec synthetic leather and natural leather. Wood and recycled plastics are also used around the interior, including on the door panels, seats, centre console and floor lining.

As standard, the iX gets a 12-speaker audio system, but this can be upgraded to a Harmon Kardon surround-sound setup with 18 speakers (including four built into headrests) and a pair of subwoofers fitted under the rear seats. A further possible upgrade is a Bowers & Wilkins concert-hall setup with 30 speakers (including eight built into headrests) and '4D Audio' capability.

BMW says production of the iX will begin in the second half of 2021, with first deliveries to customers by the end of that year. Exact pricing has yet to be confirmed, but it can be expected to be significantly more than BMW's current most expensive electric model, the £62,000 iX3, and could easily approach or exceed the £100,000 mark in higher-spec trims with significant optional extras added. 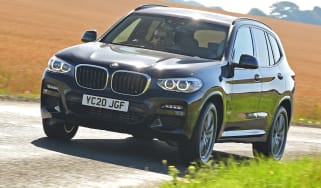 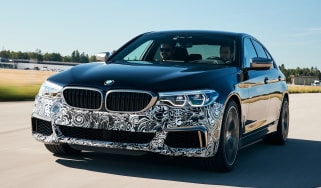