One of the best plug-in hybrid SUVs, the Audi Q7 e-tron doesn’t skimp on performance or luxury 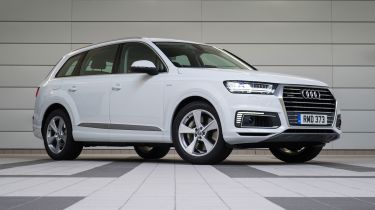 Audi’s first effort at a large plug-in hybrid SUV, the Q7 e-tron was one of the best of the breed when it was new. A rival for the Volvo XC90, the e-tron has since been replaced by newer TFSI e badged models but still stands as a practical, comfortable and fast electrified SUV.

Power comes from a 3.0-litre V6 diesel engine and an electric motor which produce a combined 368bhp. It’s enough for a 6.2-second 0-62mph time that’s particularly impressive given the Q7’s considerable 2.5-tonne kerbweight.

That rip-roaring performance doesn’t equate to a sporty demeanour, however. The Q7 e-tron handles tidily and is focused firmly on comfort and long-legged cruising. Find an example with the optional air suspension and this is particularly true, although things can feel a little at-sea in the bends.

WLTP Fuel economy of up to 156.9mpg (with the smallest alloy wheels) is quoted, with CO2 emissions of 48g/km. The e-tron can travel up to 34 miles on electric power alone and its batteries can be charged in as little as 2.5 hours from a dedicated charging point (including home-installed versions), or around eight hours if you use a 230v domestic socket.

All of that will be important, as you’ll need to keep the running costs down on what is an expensive car. As with any plug-in hybrid, the key to low running costs is being able to run the car on electric power alone as much as possible. Granted, you’ll struggle to get near the official fuel-economy figure in daily use, but somewhere around 70mpg is perfectly achievable – impressive for such a big, heavy car with four-wheel drive.

Still, it’s easy to argue you that you get value for money even in a car as costly as this – and even more so as a used car – because there’s no shortage of standard equipment. Along with LED headlights, a powered tailgate, heated leather seats with four-way adjustment and three-zone climate control, you also get Audi’s virtual cockpit dials, DAB radio and cruise control.

That level of equipment should also give you a good idea of just how luxurious the Q7 e-tron is. Five passengers can travel in sublime comfort and luxury, thanks to the huge amount of leg and headroom in the rear, as well as the superb front seats.

One of the few downsides of this car is that you can’t get the seven seats that were available on other versions of the Q7. That’s because of the big batteries that are needed to give it significant electric-only range. However, there’s class-leading boot space to compensate. 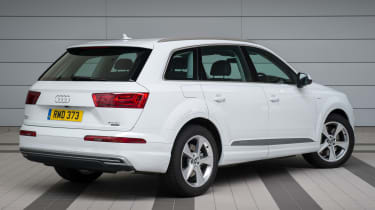 Plus, this is still a very classy car – as you'd expect from what was one of the more expensive models in the Audi range. The interior, in particular, is beautifully built from superb materials, as well as looking modern. It leaves you in no doubt that you're getting what you paid for.

Overall, the Q7 e-tron has an awful lot to commend it. It’s quick and smooth to drive, but can return excellent fuel economy and low running costs if you can keep those batteries fully charged most of the time. It's not quite as practical as the rest of the Q7 range, but it’s certainly one of the most spacious and practical five-seat SUVs.

For a more detailed look at the Audi Q7 e-tron, read on for the rest of our in-depth review.