Do electric cars have gears? Do they drive like an automatic car? Here's everything you need to know on the subject 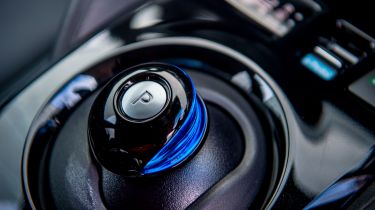 When you drive a fully electric car for the first time, you may wonder why there isn’t a gearstick next to you. And once you set off, you may be quite surprised to note that, as the car speeds up and slows down, it doesn’t automatically shift through gears like an automatic car would. That’s because there are no gears in almost all electric cars.

Electric cars don't have multi-speed gearboxes like all petrol or diesel ones do. Instead, nearly all of them get away with having just a single gear. This is especially impressive considering how fast some electric cars can accelerate. The Tesla Model S Performance, for example, can do the 0-60mph sprint in under 2.5 seconds, making it quicker than most supercars.

Why do electric cars have only one gear?

There are many reasons why electric cars have only one gear. The first is that electric motors rev to a significantly higher rate than internal-combustion engines. A typical electric motor can rev up to 20,000rpm, far higher than the usual 4,000–6,000rpm limit for conventional cars.

Also, electric motors are power-efficient throughout this rev range, meaning they don't only deliver their optimum performance within a small, narrow rev band. This also means electric cars make maximum torque almost instantly from zero revs, so they don't have a specific rev range suited to low-speed driving or acceleration.

The reason conventional diesel and petrol cars need a gearbox with multiple gears is because these engines are only capable of generating useable torque and power within a narrow band of engine speed.

Varying gear ratios help conventional engines keep within that 'power band' at different road speeds. That’s why a petrol car will easily accelerate to 20mph in first gear, but won’t go much faster without reaching the engine’s rev limit, or 'redline'. By the same logic, you'll struggle to pull away from a set of lights in sixth gear, as this ratio is designed for cruising at faster speeds.

Electric cars can reach top speed in a single gear, with little compromise in low-speed driving or usability. What engineers do is pick a gear ratio that strikes a good balance between acceleration and top speed. Pick a ratio too low, and the engine will accelerate very fast but may be limited to a low top speed. Conversely, if engineers pick an extremely high ratio, the gearing may be optimal for top-speed runs, but acceleration will suffer.

Can electric vehicles have more than one gear?

Despite all the above, some electric cars do have multi-speed gearbox. Some teams contesting the Formula E electric single-seater race series have in the past run their vehicles with a three-speed gearbox.

Although the cars are limited to a maximum power output of 170kW, the speed at which they reach this is crucial. Some teams, like Audi, ran their 2017 car with a three-speed gearbox. The addition of a gearbox helped the car reach maximum power slightly quicker. However, for the 2018 season, the team opted to run a high-efficiency transmission system with a single gear.

For road cars, engineering firm GKN Driveline has introduced a two-speed 'eTwisterX' electric driveline. In simple terms, the addition of a second gear allows for better acceleration and top speed than single-speed electric drive units do.

For low-speed acceleration, the electric vehicle sits in first gear, helping it launch quicker. When on the motorway, the car automatically shifts to the second gear for better high-speed driving and a higher top speed. A setup similar to this is used in the Porsche Taycan high-performance electric car.

Does that mean hybrid cars have an electric motor with more than one gear?

Most hybrids (plug-in or otherwise) have a standard electric motor with a single gear, as this is cheaper and less complicated to manufacture. And as explained above, single-geared units give away very little in terms of performance or efficiency, mitigating the need for a two or three-speed gearbox. The internal-combustion engine in these cars will usually put its power through a conventional automatic or CVT gearbox.

What are the benefits of having just a single gear?

From a manufacturing point of view, the biggest benefits of having just a single gear to operate the electric motor are cost and simplicity. Installing a driveline system with multiple gears immediately adds cost and complexity, which increases the car's price.

Given that electric cars already tend to cost more than their diesel and petrol counterparts, it's unlikely manufacturers will want to add unnecessarily to the price. This is especially true when the single-gear setup is already optimal for most electric cars, and delivers equal or even better performance than conventional powertrains can offer.