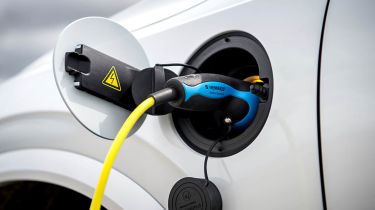 A large, premium seven-seat SUV like the Volvo XC90 Recharge is a great plug-in choice, as it gets around the disadvantages of a car like this when it comes to efficiency, combining petrol and electric power to serve up strong fuel economy and low CO2 emissions

Charging is easy – just remember you’ll have to do it every day to get the best from the car. You'll get about 20 miles of pure-electric running very easily in varied real-world driving, or up to 25 miles in slower stuff, which is competitive, but the BMW X5 plug-in does go usefully further.

With a full battery, the XC90 Recharge T8 will cover up to a claimed 31 miles on electric power alone by official standards, but in reality you'll see more like 20-25 miles depending on the sort of driving that you do.

Around town you'll see the Volvo go further than if you're on the motorway regularly. However, this isn’t exactly realistic. If you're keen to save fuel and money, you need to make sure that you can plug the XC90 in regularly at home, at work, or ideally both.

Overall, the electric range is very comparable with most rivals, but newer alternatives like the BMW X5 and Mercedes GLE are beginning to make the Volvo's electric potential look rather underwhelming.

As we’ve already mentioned, the XC90 comes with a 4.5-metre long three-pin cable as standard, while a 4.5-metre Type 2 cable for a faster charger or wallbox is a £50 extra. A very small cost but one that jars when you’re paying upwards of £65,000 – especially when it’s needed to make the most of the car's sophisticated powertrain and the efficiency potential.

Recharge times depend on the power supply you’re plugged into. A three-pin domestic socket will charge the battery up in six hours. This is cut to three hours for a 3.7kW supply, and that's the fastest charge you'll get regardless of how powerful the AC car charger is that you plug into.

Provided you buy the Type 2 charging cable, the Volvo is compatible with any Type 2 AC charger up to 22kW (which are very common in towns as well as on motorways), but it's limited to a maximum charge speed of 3.7kW. This means that it'll take three hours to charge regardless of how powerful the feed you plug into is. The XC90 isn't compatible with DC fast chargers.

There’s also a driving mode that uses the petrol engine to charge the battery on the move. It’s useful if you want to top the battery up to use for all-electric driving when you get to a town, but it does place more strain on the engine, so expect your fuel economy to dip in this mode. A battery hold function is also a feature, so you can use the petrol engine to get you down the motorway and save your electric mileage for when you get into the city.

Every Recharge hybrid model in Volvo’s line-up gets an eight-year/100,000-mile warranty that covers the battery. This means if the battery starts to deteriorate beyond set levels, then you’ll get a new one, free of charge. However, we don’t expect this to happen.