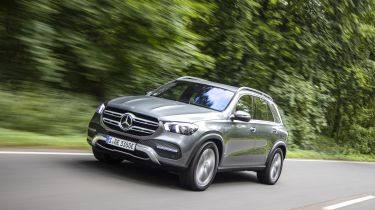 Orders are open for the diesel plug-in hybrid (PHEV) version of the latest Mercedes GLE. It’s priced from £61,360 and is available only in AMG Line guise, with the AMG Line Premium and AMG Line Premium Plus equipment packages adding £3,500 and £7,000 respectively to the list price.

Unlike petrol-electric rivals, such as the BMW X5 and Volvo XC90, the Mercedes GLE 350 de is powered by a diesel-electric powertrain. It has a comparatively large 31.2kWh battery, so Mercedes claims the GLE will do between 56 and 62 miles on electric power, depending on exact specification.

A redesigned rear end has freed up some extra space for the battery, resulting in a marginal loss in boot space compared to the standard, non-hybrid diesel version of the GLE. Load capacity drops from 630 litres to 490 litres with the rear seats in place. 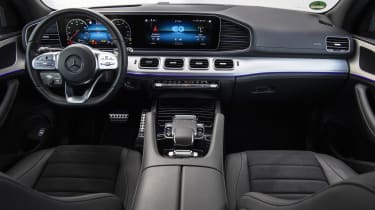 The GLE plug-in hybrid is capable of AC and DC charging thanks to its Type 2 and CCS sockets, and a new on-board charger doubles the AC charging capacity from 3.6 to 7.4kW. A public rapid charger can take the batteries from 10 to 80% in 20 minutes thanks to the maximum DC charging rate of 60kW. You only need to keep it plugged in for another 10 minutes for a full charge.

Plugging into a home wallbox will give you a full charge in around three-and-a-half hours. On the road, you can find nearby charging points using the car’s infotainment system and pay through an app – although this is only available for customers in continental Europe for the time being.

Mercedes quotes officially tested fuel economy of 257mpg and CO2 emissions of 29g/km. The hybrid GLE uses the company's 9G-TRONIC nine-speed automatic transmission and its latest energy-recuperation technology. As energy is recaptured at each wheel, the car has a natural braking capability, allowing for the ‘one-pedal’ driving that's common in pure-electric cars like the latest Nissan Leaf.

Those who need to tow will note the GLE’s towing capacity of 3,500kg and the Mercedes ‘Trailer Manoeuvring Assist’ system, which controls the steering angle of the car to make reversing a trailer, caravan or horsebox easier.

The GLE is the latest in a range of Mercedes plug-in hybrid models, including the A-Class, C-Class, E-Class and S-Class, as well as the smaller GLA and GLC SUVs. In addition, Mercedes also boasts a line-up of fully-electric vehicles, including the EQC and EQV. By the end of 2020, the carmaker is aiming to have 20 electrified models on sale.