The Volkswagen ID.3 has enough space for a family, but it’s not the most spacious electric car of its type 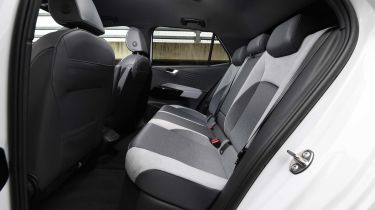 Even though it’s the same size as a Golf, the Volkswagen ID.3 is more spacious inside. That’s because it was designed as an electric car from the start, and the motor and batteries are more flexible in terms of where they can be placed than a combustion engine. The relatively sparse interior with few buttons means that there’s an airy feeling to the cabin in the front, and the seats are comfy too. Light controls mean fatigue shouldn’t be an issue on long drives.

The ID.3 has lots of room for passengers in the back seats, as there’s enough leg and headroom for adults. There are three seats in the back and because there’s no lump in the floor in the middle, it’s relatively practical to have three passengers in the rear. There are lots of storage options in the cabin, too, with places for your phone, cupholders and decent door bins for other odds and ends. 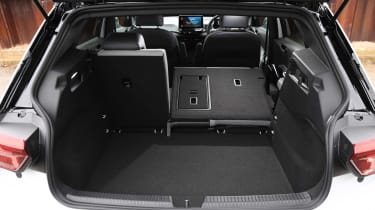 The ID.3’s boot holds 385 litres with the rear seats in place, which is only a tiny bit more than you get in a Volkswagen Golf. That’s a shame, but at least there’s plenty of room for passengers. It’s smaller than a Nissan Leaf back there, as the Japanese model has 420 litres of boot space.

Fold the seats down and it opens up 1,267 litres of luggage space, but the seats don’t fold completely flat. This means there’s a significant lump in the floor that you’ll have to heft longer items over to slide them in. Still, this is even more of an issue in the Leaf, despite that car having more space with the rear seats up. The Nissan also has less room in total than the Volkswagen.