The Toyota Camry is coming back to Europe after a 15-year hiatus. We’ve driven the hybrid saloon ahead of its return 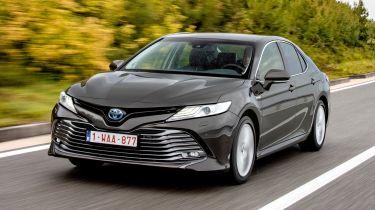 The Toyota Camry hasn’t appeared in Europe since the early 2000s, but with the departure of the mid-sized Avensis, the company believes it’s time to bring the Camry back to the UK.

Official fuel economy of 50.4mpg is by no means groundbreaking, while emissions of 101g/km aren’t low enough to trouble the class leaders either. However, the Camry is capable of travelling short distances (no more than two miles) under electric power alone, which should make it very efficient driving in towns and cities.

And it’s around town where the Camry makes most sense: it’s extremely quiet at low speeds, especially in electric-only mode, while the electric motor itself is powerful enough to deliver decent acceleration and overall performance.

It’s at higher speeds - such as on dual-carriageways and motorways - where the Camry performs less well. Accelerate hard and the revs from the engine will rise accordingly, although the noise is nowhere near as loud as older automatic hybrids from the past. In any case, the powertrain’s combined 215bhp means you rarely need to use full throttle.

At a 70mph cruise, the Camry’s engine settles down and is suitably quiet, making it easier for you to listen to the noticeable flutter of wind noise over the car’s body.

Using the same TNGA platform as found in the RAV4 Hybrid SUV, the Camry Hybrid delivers on the “confident and natural handling” that Toyota’s engineers were aiming for. Rivals such as the Ford Mondeo Hybrid might be sharper to drive, but the Camry’s light steering is neat and grip from the tyres is plentiful.

It’s comfortable, too, feeling smooth and relaxed without descending into the overly floaty or wallowy sensation that some softly sprung cars can suffer from.

On the face of it, a starting price of £29,995 looks a little steep, but a combination of reasonable running costs and a Benefit-in-Kind company-car tax rating of 23% make the Camry’s pricing look pretty compelling next to non-hybrid versions like the Skoda Superb and Volkswagen Passat. Forthcoming plug-in hybrid versions of both of those venerable large family cars could make the Camry look expensive on company car tax, though, which is no small matter since Toyota reckons 80% of the Camry’s sales will be to fleet customers.

Among those business users will no doubt be taxi drivers, whose passengers are unlikely to complain about the space in the rear: there’s enough room for six-foot adults to get comfortable, and all versions of the Camry get a leather interior as standard. 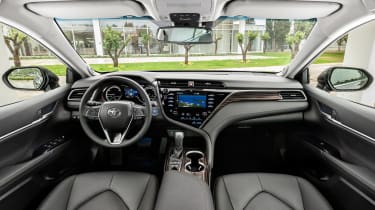 At 524 litres, the boot has plenty of space for a pair of large suitcases, although the saloon-style boot opening means loading and unloading the Camry will be trickier than with hatchback rivals like the Skoda Superb. The seats do fold down, but those wishing to routinely carry larger items should probably look elsewhere - the Toyota Corolla Touring Sports and Rav4 are both excellent, utilitarian full-hybrid family cars that’ll suit better if you regularly lug bikes or other big paraphernalia around.

Unlike the Corolla, the company has no plans for a Touring Sports estate version of the Camry Hybrid.

There are just two trims to choose from: Design, which costs £29,995, and the top-spec Excel version, which is priced from £31,295. Design cars use 17-inch alloy wheels, and get LED lights, dual-zone climate control, heated front seats and keyless entry as standard. A sat nav and a reversing camera are included, too.

While the technology is commendable, the touchscreen infotainment isn’t: Toyota’s system is one of the worst out there, combining poor graphics with a confusing user interface that’s very hard to get the hang of.

There’s no Apple CarPlay of Android Auto either, meaning no smartphone connectivity. Toyota says it’s working on fitting both, although neither will be available on early versions of the car.

Ultimately, the Camry is a well sorted, comfortable business saloon. But with plug-in hybrid rivals set to arrive in the next few months, and various equally efficient yet more practical hybrid alternatives in Toyota’s own lineup, you have to really want the executive styling and comfort levels to justify the Camry whether you’re a company or private buyer.