The first official teaser images of the electric SsangYong Korando SUV have been released, ahead of its expected April 2021 UK on-sale date 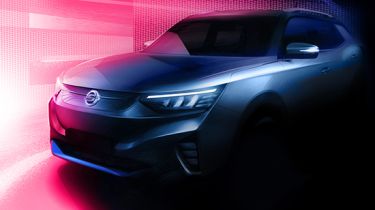 The first teaser images of the fully electric SsangYong Korando, which is set to arrive early in 2021, have been released. They show a head-on and front three-quarters view of the car, which shares its basic design with the existing petrol and diesel Korando, but appears to boast electric-specific design touches such as a blanked-off grille.

Provisionally known as the E110, the electric Korando is set to feature a 61.5kWh battery supplied by LG Chem. The company claims a driving range of 261 miles for the car, although this figure was reached using the redundant NEDC test; real-world range should amount to around 200 miles under the newer WLTP test.

A single electric motor generating 188bhp will make this model the most powerful Korando in the line-up. Performance figures haven't been released yet, although SsangYong is promising "best-in-class" acceleration and a top speed in the region of 95mph from the E110. 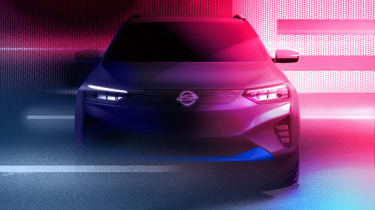 Earlier in 2020, media reports suggested that the electric Korando could become a victim of financial cutbacks by the South Korean brand's Indian parent company Mahindra in the wake of the coronavirus pandemic, but these teaser images indicate the project is still on track.

Mahindra owns nearly 75% of SsangYong and its funding is key to the brand's turnaround plan, which incorporates an electric-car platform similar in concept to the Volkswagen Group's MEB, with an electric version of the smaller Tivoli SUV set to follow the zero-emissions Korando.