Smart EQ ForFour reliability is unproven, and although it's well equipped, its safety rating is so-so 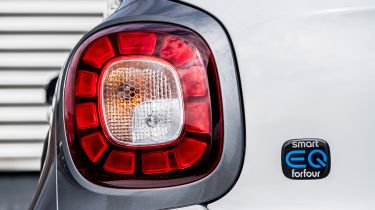 Smart is closely affiliated with Mercedes, and its cars are sold alongside models that wear the three-pointed star at larger Mercedes dealerships. The two brands haven't always enjoyed equal reputations for reliability, though.

The EQ ForFour wasn't individually crash-tested by Euro NCAP, but ratings for the petrol ForFour apply. That model received a four-star rating when tested in 2014, since when additional features such as Autonomous Emergency Braking (AEB) have become a requirement.

Too few Smart owners participated in our sister title Auto Express' 2018 Driver Power satisfaction survey for the brand to appear in the results, but its performance in previous years has been chequered to say the least – it notched up a last-place finish in 2013.

Reliability has been a concern for previous generations of Smarts, but this generations seems to be rather less problematic. The EQ ForFour is a little harder to judge, having been on sale for less than two years. Smart build quality has certainly made a step forward in recent years, though.

The Smart ForFour was crash-tested alongside its Renault Twingo mechanical twin when the two cars went on sale in 2014. It was awarded a four-star rating, having scored fewer points than other small cars such as the Volkswagen up!. The Renault ZOE, meanwhile, received a five-star crash safety rating the previous year.

The Smart EQ ForFour was never tested in its own right, although it does have the autonomous emergency braking (AEB) that the petrol ForFour lacked at the time of testing. However, other driver-assistance features such as lane-keeping assistance and active cruise control weren't offered and lane-departure assistance was found only on the options list.

A driver's knee airbag was fitted in addition to front, side and window airbags, and the mandatory electronic stability control and anti-lock brakes have a sidewind assist feature.