With a real-world range of less than 70 miles, the Smart EQ ForFour really is best suited to city use 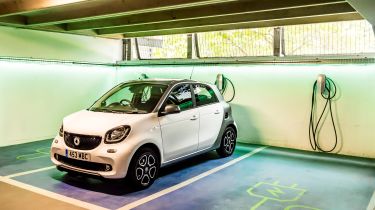 With a relatively small-capacity battery by today's standards, the Smart EQ ForFour isn't the kind of electric car you'll take on a cross-country trip or continental holiday. However, those who make a lot of short journeys on crowded city streets may find a sub-70-mile real-world range perfectly acceptable, and a smaller battery means that a full charge takes a little less time than longer-range rivals.

Smart claims a 68-mile range for the EQ ForFour assuming a fully charged battery, calculated under the latest WLTP testing procedure. There's only one 17.6kWh battery capacity available, so that's the most you're going to get.

The EQ ForFour has relatively nippy performance and is quite happy to sit at fast motorway speeds, but do so for long and that battery range will drop fairly quickly. You'll find yourself hanging onto a charged battery for far longer at lower speeds.

The Smart EQ ForFour has a built-in 7kW charger, which can optionally be upgraded to a 22kW item. The charging performance either unit offers depends on the mains power source used.

If the standard 7kW charger is fitted, Smart claims home charging from a mains socket will boost the EQ ForFour's battery from 10 to 80% charge in under six hours – there's no improvement in speed with the 22kW charger. Where a home wallbox is available, the same increase in battery charge takes two and a half hours with the standard 7kW charger, or under 40 minutes if the 22kW charger is fitted.