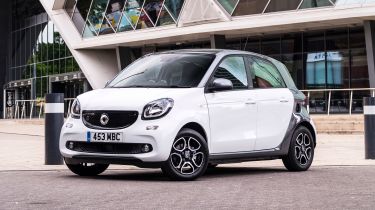 Smart has always been associated with innovation and its tiny city cars are among the most distinctive on the road. It comes as no surprise, then, that the brand wanted a slice of the electric city-car pie; the Smart EQ ForFour fought to attract buyers away from the similarly sized Volkswagen e-up! and slightly larger Renault ZOE.

Those tempted away from the Renault had to manage their battery range expectations, though – the EQ ForFour can travel only around a third as far as the latest ZOE on a full charge. There are many for whom this won't matter, though, and the tiny, easy-to-park EQ ForFour occupies a definite niche for those who make lots of short, door-to-door urban trips.

Although the boot is a fairly tight 185 litres in size, the versatile rear-seat configurations are handy and wide-opening doors make for easy access for parcel couriers or rear-seat passengers alike. There's also a remarkably long list of standard equipment; it runs as far as sat nav and a remote-control app that lets you pre-heat the EQ ForFour's interior before you set out. Autonomous emergency braking (AEB) is standard, too.

We reckon the EQ ForFour is more enjoyable to drive than a petrol Smart, and it arguably has the edge on the ZOE, too. On paper, its acceleration is slower, but it feels very sprightly from a standstill and easily has the legs on urban traffic. Its accelerator is very linear, too, which makes it easy to maintain a very slow crawl without jerking passengers' heads back and forth.

The electric Smart feels more stable and planted than its internal-combustion-engined stablemates – a consequence of the firm suspension needed to carry a power pack that makes the EQ far heavier than a petrol ForFour. The downside of this is a rather firm and fidgety ride, which never really settles down. 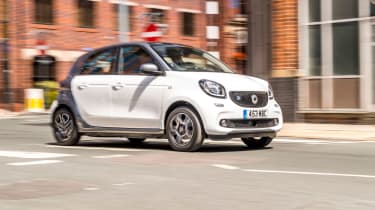 With a 0-62mph time of 12.4 seconds and a top speed of 80mph, the Smart doesn't feel out of its depth on faster roads, but prolonged high speeds will see the range rapidly tumble and send you searching for a charging point where – with the optional 22kW on-board charger – you can restore an 80% charge in less than 40 minutes.

Charging cables were provided to suit a home wallbox, public chargers and domestic three-pin sockets, and a 7kW charger is standard, taking the EQ's 17.6kWh battery from 10-80% charge in a claimed two-and-a-half hours from a domestic wallbox.

With its limited range and compact interior, the EQ ForFour's limitations are obvious, but it's a desirable little car nonetheless, with a characterful design, perky driving experience and lavish standard equipment. It has a real sense of fun to it, and may well be the right zero-emissions commuter tool if range and versatility aren't top priorities.

If you need to regularly carry four passengers or bulky loads for longer distances, a ZOE will suit you better, but you'll need to reach a little deeper into your pockets. Smart hasn't always returned the most inspiring results in our sister title Auto Express' annual Driver Power surveys, and the petrol ForFour received a lacklustre four-star Euro NCAP crash-test rating back in 2014 – the EQ has yet to be tested, but standard safety equipment has been increased since then.

For a more detailed look at the Smart EQ ForFour, read on for the rest of our in-depth review.