The EQ ForFour offers nippy acceleration and is easy to drive, but it's no electric 'driver's car' 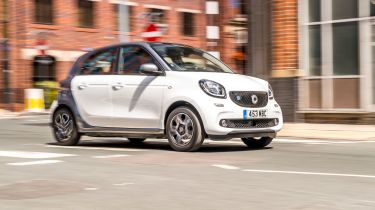 Having lost ground to rivals when it comes to range and running costs, the Smart EQ ForFour wins back a few points with the way it drives. In fact, the electric four-seat Smart is rather more appealing than its petrol-powered stablemates, with sharper responses and greater stability in corners.

It shows less of an objective advantage over its electric rivals, but feels more special than the Volkswagen e-up! and has a greater sense of fun than the Renault ZOE.

The Smart EQ ForFour's electric motor produces 81bhp; plenty for such a diminutive car. In fact, thanks to the way an electric motor delivers all its power the moment you put your foot down, the Smart feels a lot more sprightly than its 12.7-second 0-62mph time suggests.

Smart also quoted a 0-37mph time of 5.5 seconds, which is more relevant to urban driving conditions, showing that the EQ ForFour gets away from a standstill smartly enough to stay well ahead of buses and other city-bound traffic. What's more, a progressive accelerator makes it easy to meter engine power so you can creep forwards smoothly when the traffic grinds to a slow crawl.

The EQ ForFour doesn't feel out of its comfort zone outside the city, either. Although its acceleration peters out towards its top speed of 80mph, the same is true of its petrol equivalent to a far greater extent, and EQ drivers will never feel apprehensive when a sudden burst of speed is called for, such as when overtaking a lorry or joining fast-flowing traffic.

With a single-speed gearbox, progress is smooth and easy; all you need to do is point the car in the right direction, choose your speed, watch the road for hazards and obey traffic laws. Although there's no semi-autonomous driving mode, the EQ makes for such a relaxed driving experience you're unlikely to grow fractious behind the wheel.

With such impressive behaviour at higher speeds, it's a real shame that this drains the battery so quickly. It means the EQ ForFour is better suited to brief trips on free-flowing urban dual-carriageways than prolonged motorway journeys.

Not only does the Smart EQ ForFour feel more eager than its petrol stablemates, its handling is more assured, too. The tall, upright car seems very settled on the road, perhaps a consequence of its heavy batteries and electric motor weighing it down.

When you encounter a winding road, you'll find the electric Smart less prone to body lean than petrol models, thanks to how its extra weight is positioned low in the car's body. Stability is also helped by the stiffer suspension fitted to support those bulky batteries, the side effect being a rather firmer ride than petrol Smart passengers will experience.

Don't confuse this firm, planted behaviour for a sporty character, though – the front tyres are narrower than those of the powered rear wheels, and are of a low-friction design that favours fuel efficiency over grip. It means that carrying too much speed into a corner will have you ploughing straight on with the tyres squealing – safe as long as there's no oncoming traffic, but rather untidy.

Spirited driving lends no more feel to the rather lifeless steering, either, and there's no sensation that you're reaching the limits of grip. If you're planning to have fun on a country lane when driving a Smart EQ, it pays to take corners slowly and use that nippy acceleration between them.