There are icons, and then there are Icons, right? Well, the classic original Mini certainly ranks as the latter. It’s right up there with the London Black Cab and the Land Rover Defender, woven into the very fabric of all that is Great and British.

And, d'you know what? It’s the perfect car for conversion to an electric powertrain for the simple reason that electric propulsion works nowhere better than in the city. And what better city car is there than Alec Issigonis’ Mini? Quite.

That was what Swind – the engineering company behind this E Classic conversion – thought, anyway. Don’t call it a MINI, or BMW will throw a lawyer at you. This is a company that made its name in race engineering, but has now embraced electrification and is offering this fully renovated classic Mini. Priced from £79,000, it comes complete with a 24kWh battery, a range of around 120 miles and a charge time of four hours from a 7kW charger.

So, not one for the masses judging by the price, which is a shame because there really is some hard logic to an electric original Mini. After all, driving the E Classic around Swindon and the surrounding countryside, the Mini proved just how brilliant it could be with an electric motor driving its front wheels.

It’s surprisingly noisy, with a constant buzz-whir-hum going on around you as you hop and scurry along in the fantastically responsive E Classic, but actually that grittiness enhances the appeal of the E Classic. It’s an old car, after all, and faultless, modern refinement would be a bit odd in a car that’s older than your Nan.

But there are some modernities that do make sense, like sat nav and climate control, both of which are offered alongside standard underfloor heating (no, really) and USB charging. 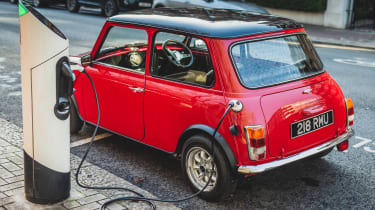 The electric classic car movement is not a new one, but it is gaining popularity as legislation tightens on internal combustion-engined cars. From behind the dish-shaped wheel of the E Classic, it’s easy to see why: it’s scrappy and fun, but also absolutely perfect for modern life in London.

All the cool of the original classic, with all the smug, tax-dodging appeal of electric power, plus the added comfort and convenience of modern connectivity.

It’d be great to see classic conversions like this become more attainable, certainly, but while the Swind E Classic is undeniably an expensive eccentricity, it’s also a surprisingly logical one for 2019 and beyond.