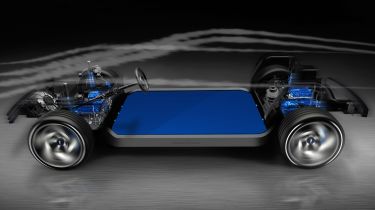 The new Automobili Pininfarina Pura Vision luxury electric concept car has been teased ahead of its planned launch at the US Pebble Beach show in August 2020, with a production model set to follow in 2022.

The Pura Vision concept is built on an all-new electric-vehicle platform that the Italian brand has co-developed alongside Bosch and Benteler. It'll underpin a range of vehicles the company has in the pipeline, with four new cars set to follow the forthcoming Battista hypercar by 2025.

The production version of the Pura Vision concept will be the first of those: a 120kWh battery is expected to give between 310 and 342 miles of range, with three electric motors developing over 1,000bhp. Four-wheel drive should give the concept some degree of off-road ability, with air suspension giving drivers the option of raising the ride height on rougher terrain.

CEO Michael Perschke describes the Pura Vision “as not an SUV, but an S-LUV: a Sustainable Luxury Utility Vehicle.” The car will be over five metres long and nearly 1.6 metres tall.

A smaller, sportier electric SUV will follow, with an insider hinting to our sister title Auto Express: “Think Range Rover Sport to the Range Rover”. Designers have also drawn up plans for a GT car.

Images of the Pininfarina Pura Vision won’t appear until nearer the car’s reveal next summer, although the vehicle was exclusively previewed behind closed doors at the 2019 Los Angeles Motor Show.

The concept takes its inspiration from the Alfa Romeo Superflow – an historic Pininfarina design – with a glass canopy that covers the entirety of the cabin. The feature is made possible by an almost invisible aluminium structure supporting the glass, which can change colour at the push of a button thanks to ‘electro chromic materials’.

The windscreen is set back to accommodate a long, GT-esque bonnet, with slim headlights and a deeper, lower nose than that of the Battista. At the back, the door of the boot protrudes just below the rear screen, with a spoiler also accommodated within the design. Thin, wide LED tail-lights also feature. 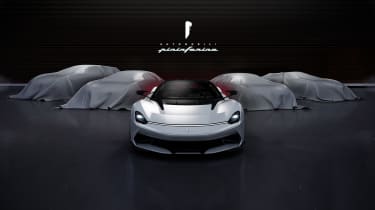 From above, the Pura Vision has the profile of a bottle, with a slim front spreading into a wide rear thanks to rear wheelarches wider than those on a Porsche 911 Turbo.

Rear-hinged doors are also included in the design, however Pininfarina says these won’t make production. The exterior panels will be made in carbon fibre, with customers offered a range of finishes.

Inside, the concept contains a sweeping dashboard with an extra-wide digital display and a large, low-set infotainment screen. The Pura Vision will have four seats, although the production model will adopt a two-plus-one rear bench.

“Two of our benchmark cars are the Bentley Bentayga and Lamborghini Urus,” chief design officer Luca Borgogno told Auto Express. “But our car will be both sporty and elegant at the same time.”

“We wanted to put really rich materials inside the car,” Borgogno added. “Around 90% of what you touch is advanced wood, although it could be carbon-fibre, too.”

Production of the Pura Vision looks set to take place in Italy, with a new facility capable of producing up to 20,000 vehicles per year. Perschke explained: "As we head towards celebrating Pininfarina’s 90th anniversary in 2020… we want to underscore our commitment to Italy through production of pure-electric vehicles there."