Adequate performance, a controlled chassis and a well engineered drivetrain make the UX a pleasant drive 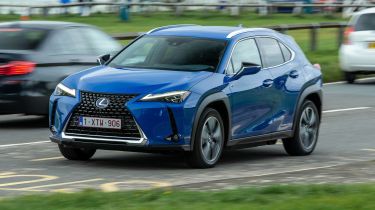 Lexus isn't known for making cars that thrill, its focus instead put on making its models quiet, refined and comfortable. That extends to the UX 300e, a car whose switch to electric power has only amplified those qualities.

Performance is strong and well suited to the car's size and purpose – punchy but not surprising as perhaps the Volvo XC40 Recharge P8's powertrain is. The electric motor performs its function almost imperceptibly, with only the largest throttle inputs summoning an audible whine.

The overall feeling is of good engineering and high quality, and this is particularly apparent in the car's regenerative braking system. It's adjustable in strength using steering-wheel paddles and while it's not strong enough to stop the car fully (as Nissan's E-Pedal system can), it never feels intrusive or odd through the pedal.

The UX feels hugely relaxing, with very little wind noise and a very refined and well integrated drivetrain. Our test car with 18-inch alloys did create some road noise and found some larger bumps a challenge. We'd stick to a 17-inch set for this reason.

The UX 300e has just the right amount of power for a car of its size; with 201bhp on tap and a healthy 300Nm of torque available at any speed, it feels zippier than its 7.5-second 0-62mph sprint would suggest. There's enough torque to overwhelm the front wheels if you aren't smooth with your inputs, and plenty of punch for most real-world scenarios. Top speed is 100mph, but that's irrelevant in a car such as this.

Despite weighing 1,840kg, the littlest Lexus is good to drive. Its steering is weighty and direct, body control is excellent and – while there's a lack of communication between the road surface and the driver, the UX feels responsive, planted and under control.