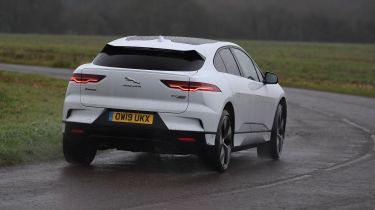 The Jaguar I-Pace was designed from the ground up to be an electric car, so it doesn’t suffer the compromises that can affect electric cars which began life as a standard combustion-engined model. As such, the official range of 292 miles is very impressive, but our experience of it in the real world suggests that you're more likely to get some 220 miles, which is disappointing given its performance in official tests. Still, that's on a par with the Mercedes EQC and Audi e-tron.

The I-Pace has a 90kWh battery that gives a range of 292 miles according to the latest testing procedure. Tesla estimates that the entry-level Standard Range variant of its Model X will return 230 miles, so the I-Pace appears to stack up well against its main competitors.

That said, it's disappointing that in varied real-world driving we've seen more like 220 miles from the I-Pace, which is only a fraction over the real-world range we've seen from the e-tron and EQC, which have much lower official ranges.

Late in 2019, Jaguar announced a software update – available to owners visiting their nearest dealership – that it claimed would boost real-world driving range by some 12.4 miles. The upgrade consists of improvements to the thermal management system, the regenerative brakes, the torque delivery (said to be more efficient in 'Eco' mode) and to the battery's performance at lower states of charge.

Jaguar says a 100kW charger will give you an 80% charge in 45 minutes, and with a network of 100-150kW chargers being rolled out now, it's increasingly likely that you'll be able to make use of that charging rate even if it's still worth checking the chargers on your route. It's just a shame that it's not as good as the rapid charging offered by the Audi e-tron, never mind the Porsche Taycan.

In the meantime, a 50kW charger of the kind that are routinely available in motorway services will charge the car to 80% in around an hour and 30 minutes.

Get a 7kW charger installed at home (you’d be mad not to) and it can charge the car from zero to 80% in 13 hours – acceptable if you’re charging overnight, and comparable with the fastest home-charging available for Tesla. Jaguar doesn’t provide home chargers itself, but has teamed up with Pod Point and Chargemaster, who'll install a 7.4kW wallbox for around £300 (after a £500 government grant) provided you have the necessary off-road parking.

The Jaguar does come with a three-pin plug that would allow you to charge it using your standard domestic socket at home, but it’ll take over 24 hours to charge the I-Pace to 80% using that method. Any electric car with a very large battery, like the Jaguar’s 90kWh unit, will take days to charge from a domestic plug, ruling out their viability if you don’t have access to a fast-charging point.

The battery in the I-Pace is covered by an eight-year/100,000-mile warranty, and will be replaced by Jaguar if the battery performance (essentially the maximum range of the vehicle) drops by more than 30% in the first eight years. Otherwise, Jaguar’s standard three-year/unlimited-mileage warranty applies to the I-Pace. Tesla covers all its cars with a four-year/50,000-mile warranty, while its battery warranty is eight years/unlimited mileage.